What You Don't Know About... Joe Mantegna 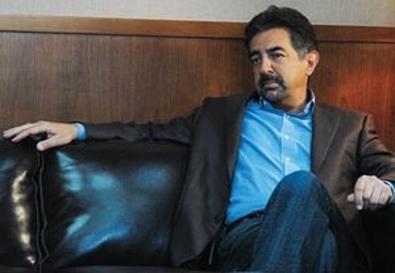 Photo Source: Richard Cartwright/ABC Studios
When Joe Mantegna met playwright David Mamet in the early 1970s at Chicago's Organic Theater Company, it was the beginning of a long and fruitful collaboration. Mantegna won a Tony in 1984 for his performance in Mamet's Pulitzer-winning "Glengarry Glen Ross" and later appeared in several of the writer-director's films. After roles in such movies as "The Godfather Part III" and "Searching for Bobby Fischer," Mantegna made his directorial debut in 2001 with Mamet's "Lakeboat." He earned three Emmy noms ("The Last Don," "The Rat Pack," "The Starter Wife") before joining the cast of CBS' "Criminal Minds" in 2007. The married father of two is also an active philanthropist and -- with his wife of 35 years -- Arlene Vrhel, owns the Burbank restaurant Taste Chicago. Mantegna, 63, chatted with "THR" before receiving a star on the Hollywood Walk of Fame, which will be placed next to that of his childhood idol, Errol Flynn.

THR: Perhaps because a number of your film and TV roles have taken place there, you seem the quintessential New Yorker, but you're actually from Chicago.

I'm complimented by that. I love New York City and have very strong connections to it. I lived there for six years, and my youngest daughter was born there. It has been very good to me.

THR: Beyond your stage career, your body of work includes more than 100 big- and small-screen roles. For which do you have a greater affinity?

There's a certain enjoyment you get from each, but you never lose that feeling for live performance once you've done it. The major difference, of course, is that when you're performing live, it's a reciprocal experience. There's an energy you suck back from the audience. It's almost like a drug.

THR: What do you recall of your "Glengarry Glen Ross" experience?

It was the role that had the most impact on my life. It was a magical year, to win a Tony Award and be in a show that was a Pulitzer Prize winner. As an actor, those are the things you dream about when you're a kid. I was able to wring everything out of it; it was a complete, full experience. The only thing I fell short of was doing the movie version.

THR: Were you ever approached to do it?

No. During our national tour, Mamet came to visit me in my dressing room. He said: "I sold the rights to 'Glengarry Glen Ross' to movie producers. It's already a done deal. Al Pacino is going to play the part, and that's that." This didn't totally shock me. I was still a nobody; I hadn't started my film career yet. Then he reached in his bag and pulled out two scripts: "House of Games" and "Things Change." He put them on my dressing table and said, "But I won't make these two movies without you." It was a pretty bold statement, and he followed through. I am forever grateful to him. It certainly softened the blow of not having the opportunity to do the film version of "Glengarry."

THR: You've been on "Criminal Minds" since 2007. What are the best and worst things about being on a series?

Prior to getting the show, I was looking for continuity in my life and career. My dear friend Dennis Franz told me: "If you get a chance to do a series, Joe, do it. You're going to like working like we used to at the theater company, where you have the same group of people and there's a familiarity -- as long as you get lucky and get a group you really feel good about." He was right. If there's a downside, it's nothing obvious to me. There's something to be said for the fact that I can come home at night nine months out of the year to my house and kids. I know what it's like not to do that.

THR: "Criminal Minds" is known for its graphic and gruesome story lines. Has there been one you found too objectionable?

When I got this show, I did a lot of research. I went to Quantico, Va., and FBI headquarters in Washington, D.C. I work with our technical adviser, Jim Clemente, who is a retired profiler. It's given me tremendous respect for those who really do this job. There's nothing so horrific or objectionable that we do that could rival what it would be like to face these scenarios in reality.

THR: You're very devoted to the role of Fat Tony on "The Simpsons" and go out of your way to do voice-over work for it. Why?

He's my longest-running character! I've never done anything else for 20 years. When I was asked to do that role, I thought it was a one-shot deal. It seemed to resonate with the producers, and I was asked to come back -- and then again. It got to the point where they felt that he was an important character for the series. I take that very seriously.

He won't be one of the heroes, let's put it that way. I tend to play either the guy from the good side of the street or that other guy. Grem is more one of those other guys.

THR: Your 21-year-old daughter Gia is also an actor. What advice have you given her?

I told her to take her job very, very seriously but to not take the industry seriously at all. If you let yourself become too affected by all the externals -- the publicity, the press, the fans -- it can bury you. Do your work as professionally as possible, and love what you do.

THR: Tell me about Taste Chicago.

My wife is a great cook. On Super Bowl Sundays we'd invite people over, and she'd make Italian beef sandwiches, which are to Chicago what Philly cheesesteaks are to Philadelphia. Our guests would say: "Oh, man, these are so good; it's just like back home! Why don't you open a restaurant?" So we opened Taste Chicago in 2003, and it has turned into a real hangout for actors -- especially on Fridays, when a big Mamet group comes over. All the old guys: J.J. Johnson, Geoff Pierson, sometimes Ed O'Neill. And then a lot of New York actor types: Bobby Costanzo, John Capodice. Jay Leno has been caught in there numerous times.

THR: Autism is a subject close to you. Tell me how it has affected you and your involvement in nonprofits devoted to the disorder.

When people ask, "What is it like to have a daughter with autism?" I say, "I don't know what it's like not to." [Older daughter Mia, 23, was diagnosed as a baby.] What's important is how you deal with it. I feel lucky because we're in a position to provide her with things that she may need. What I do is nothing: I lend my name to things; I host and play in golf tournaments; I emcee events -- but really, what's that? It's lending whatever value my celebrity status has toward something that other people are working on 365 days a year. If my participation helps those in the trenches move forward, why wouldn't I get involved? We've been blessed in so many other ways.