'Kong: A Goddamn Thirty-Foot Gorilla' Is Crammed With Imagination 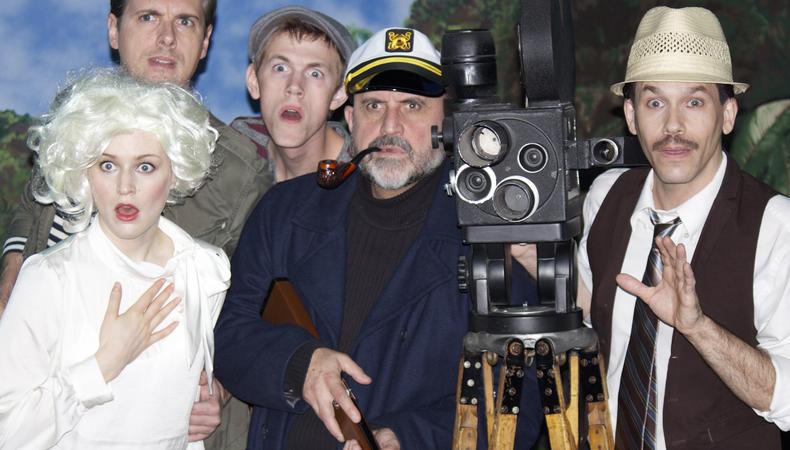 Now terrorizing audiences with uncontrollable laughter and audible guffaws, Adam Hahn’s “Kong: A Goddamn Thirty-Foot Gorilla,” utilizing miniature rubber soldiers, dinosaur sock puppets, and cardboard skyscrapers to tell its tale, is so delightfully bare-bones that it makes “Silence: The Musical” look like “Les Miz.” This is apparent right from the start as audience members are given a sheet of paper announcing that they’ve been inducted into the U.S. Army Air Corps and will be called upon to deal with an emergency in New York. Following are printed instructions detailing how to turn the handout into a paper airplane to throw at the gorilla upon the squadron commander’s order to “Dive!”

This retelling of the oft-remade classic film “King Kong” begins on the deck of Carl Denham’s ship as it makes its way through the Indian Ocean. You know the water’s choppy, because the actors are swaying in unison to create the illusion. No trick is cheap enough—or more wonderfully silly—including using a disheveled Barbie doll to represent the kidnapped Ann Darrow (played at most times by the life-size Sara Kubida) while a not-so-fearsome giant gorilla (Germaine De Leon, clad in black and with panda makeup over his eyes) dances and snorts around it.

Director Jamie Robledo has obviously encouraged his cast to pull out every stop. The stone-faced Eric Curtis Johnson, as the heroic Jack Driscoll, has hilarious moments recalling the details of the events on Skull Island while freaking out at an A.A. meeting. As the wisecracking Denham, JR Esposito has great fun cajoling a girl from the audience to chain up onstage as a sacrifice to Kong. David Caprita, as the ship’s captain, elicits shrieks writing letters to his fallen shipmates’ next of kin, describing each death in ever-greater grisly detail.

Arden Haywood, who plays the native chief, wipes off his tribal makeup and discards his feathers to address the audience after Kong is captured. The actor admits that he’s killing time as a set change is executed behind the curtain, justifying it by saying, “In the film, there aren’t any more black people from this point forward anyway—I guess there weren’t any black people in New York in the ’30s.” Beyond this, Haywood wonders why there were black people in the film in the first place, as Southeast Asia is some 9,000 miles from Africa. “But ‘King Kong’ isn’t a movie about race,” he continues. “It’s about a 30-foot black gorilla captured from his home and brought in chains to America, then hunted down and killed when he falls for a white woman.”

After Kong takes his tumble, Denham stands with reporters and onlookers around the dead gorilla to offer the famous tagline: “It was beauty killed the beast.” After a beat, one of those gathered simply says, “No, I’m pretty sure it was the airplanes.” Such is the wonderfully inane and pleasantly disrespectful humor of “Kong,” proving anything can be accomplished with a heaping dollop of unstoppable imagination.