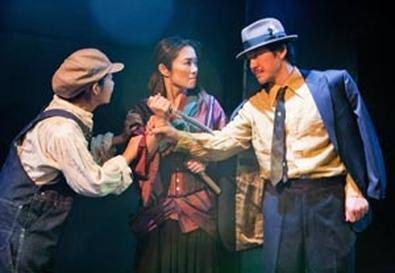 Photo Source: Kenji Mori
Blending such diverse elements as traditional Noh and Kabuki theater, contemporary dance, American cowboy movies, and Japanese anime, director Jun Kim transforms "Kutsukake Tokijiro," Shin Hasegawa's 1929 play about honor and love among gangsters, into a 75-minute work of imaginative postmodern theater. In this production by the Kurotama Kikaku company, currently running at the Flea Theater, intense scenes performed in Japanese with projected English subtitles precede frenetic dance-battles, and passages of rustic comedy in English follow plaintive folksongs. Though the piece ultimately feels uneven because some of the elements fail to harmonize, and the tale's emotional payoff is blunted by their sheer profusion, "Kutsukake Tokijiro" comes across overall as a theatrical extravaganza that should appeal to both the serious theatergoer and the restless high school student.

A hardened but honorable gangster named Kutsukake Tokijiro (Toki for short) challenges his enemy Sanzo to a fight to the death, and in the ensuing battle Sanzo dies. When three other gangsters attempt to kill Sanzs pregnant wife, Okinu, and son, Tarokichi, Toki takes the widow and child under his protection and flees. As they make their way across the countryside, singing folksongs to support themselves, Toki and Okinu fall in love, though neither can acknowledge it, to each other or anyone else. To acquire extra money, Toki agrees to work for a local crime boss, and as he goes about his bloody business, Okinu goes into labor. She and her baby die, however, causing a heartbroken Toki to vow that he will never again work as a gangster.

Yasu Suzuki delivers a cool but nuanced performance as Toki, making him credible as an action hero in one scene and a man with a conflicted soul in others. Hiroko Yonekura manages the difficult feat of making us believe that Okinu could fall in love with the man who killed her husband. As the innkeeper Yasbeh and his wife, Oroku, Jiro Ueno and Jan Mizushima deliver performances planted in low comedy that rise to elegiac heights when they relate the death of Okinu.

One of the joys of living in New York City is that the artistic environment here provides niches for artists of all stripes and opportunities for us to experience their often cutting-edge work. Those who yearn for theater that forges new modes of presentation should thank both Kurotama Kikaku and the Flea Theater for presenting this unique and bracing production.