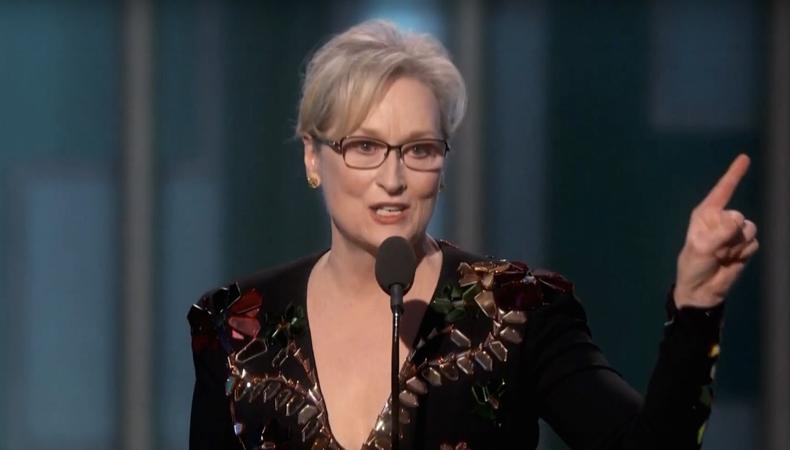 As in years past, the HFPA honored freshman TV series and performers, including Donald Glover and his comedy “Atlanta,” Billy Bob Thornton of Amazon series “Goliath,” and “The Crown,” as well as its star, Claire Foy. “I grew up in a house where magic wasn’t allowed so everybody in here is like magical to me,” said Glover, accepting the award for best actor in a TV comedy. “We’re the ones who kind of, in a weird way, tell a story or a lie to children so they do stuff we never thought was possible.” Tracee Ellis Ross of ABC’s “Black-ish” won the award for leading actress in a comedy series, the first black woman to do so since Debbie Allen in 1982.

A24’s “Moonlight” won the Globe for best motion picture drama. A visibly surprised Isabelle Huppert accepted the award for leading actress in a drama for “Elle,” from Sony Pictures Classics, which also took home the statue for foreign film. Casey Affleck was recognized in the leading actor drama category for Amazon Studios and Roadside Attraction’s “Manchester by the Sea,” while Aaron Taylor-Johnson took home the supporting trophy for Focus Features’ “Nocturnal Animals.”

Viola Davis, winning her first Golden Globe as supporting actress in Paramount Pictures’ “Fences,” thanked director-actor Denzel Washington and her fellow collaborators. She later introduced this year’s Cecil B. DeMille Award recipient, Meryl Streep, calling her “an observer and a thief. She waits to share what she has stolen on that sacred place, which is the screen.” Davis added, “You make me proud to be an artist. You make me feel that what I have in me, my body, my face, my age, is enough.”

gave a stirring speech in which she pointed out that Hollywood, foreigners, and the press are among the most vilified groups today in the wake of President-elect Donald Trump’s electoral college win. “What is Hollywood anyway?” she asked. “It’s just a bunch of people from other places.... Hollywood is crawling with outsiders and foreigners and if we kick ’em all out, you’ll have nothing to watch but football and mixed martial arts—which are not the arts.”

She ended with a quote from the late Carrie Fisher. “As my friend, the dear, departed Princess Leia, said to me once, ‘Take your broken heart, make it into art.’ ”

For a full list of 2017 Golden Globe winners, see below.

Best TV Series, Drama
***The Crown
Game of Thrones
Stranger Things
This Is Us
Westworld

Best Performance by an Actor in a Leading Role in a Series, Limited Series, or Motion Picture Made for TV
Riz Ahmed, The Night Of
Bryan Cranston, All the Way
***Tom Hiddleston, The Night Manager
Courtney B. Vance, The People v. O.J.: American Crime Story
John Turturro, The Night Of

Best Performance by an Actress in a Supporting Role in a Series, Limited Series, or Motion Picture Made for TV
***Olivia Colman, The Night Manager
Lena Headey, Game of Thrones
Chrissy Metz, This Is Us
Mandy Moore, This Is Us
Kerry Washington, Confirmation

Want to win a Golden Globe? Check out our audition listings! And for acting advice, visit Backstage’s YouTube channel!

Jack Smart
Jack Smart is the awards editor at Backstage, where he covers all things Emmy, SAG, Oscar, and Tony Awards. He also produces and hosts Backstage’s awards podcast “In the Envelope” and has interviewed some of the biggest stars of stage and screen.
END_OF_DOCUMENT_TOKEN_TO_BE_REPLACED