LA Review: 'Blame It on Beckett' 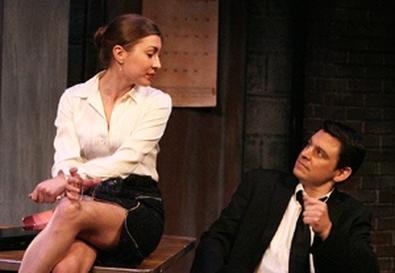 Perhaps veteran dramaturge and literary manager Jim Foley (Louis Lotorto) has been on the job too long in John Morogiello's razor-sharp comedy "Blame It on Beckett." Drowning in a sea of play submissions stacked high around his desk in a chaotic office deep in the bowels of a struggling regional theater company, Foley is fueled by coffee, cigarettes, and a barrage of medications he pops with the regularity of a love-struck teenager downing Altoids. He proclaims that he loves his job; he just hates bad plays. He doesn't even need to read them to know this; he can tell if they're worth perusing just by looking at the bindings.

Foley especially hates Samuel Beckett, whom he believes "wreaked more havoc on dramatic literature than Oliver Cromwell," and the issue-based plays of the 1960s, a time when, as he sees it, playwrights "shook the Republicans right out of the audience and made rich Democrats feel good about themselves."

Morogiello succeeds where many others have failed, creating a smart backstage-themed play about a disgruntled "toiler in the thespian vineyard" and the brutally ambitious artists and nonartists surrounding him as he wades through his scrappy, unhappy life and career. Lotorto is spot-on as Foley, at once irredeemably cantankerous and sweetly lovable as his character rants, bellows orders, and slams the phone down on eager young playwrights wanting to know the status of their doomed submissions. Foley has fallen into an emotional abyss, presumably since the death of his longtime partner, and is trapped in sheer survival mode in a company whose mission statement says that it mentors new works, despite having a literary manager who sees the only purpose of his job as "to endure."

Blythe Auffarth is a perfect match as Foley's wide-eyed new intern Heidi, whom he tags "Mary Poppins." That's before she turns into Eve Harrington, keeping a journal of her boss' deficiencies in a dubiously noble effort to save an office that she views as a place where "great theater goes to die." Peggy Goss is brilliantly dry as playwright Tina Fike, a successful yet world-weary Wendy Wasserstein type. So is Brian Ibsen as Foley's boss Mike Braschi, an ever-grinning glad-hander who rose from the ranks of ushering to become the company's ruthless general manager, with an eye on Broadway as his career goal.

Under the serendipitous leadership of director Andrew Barnicle, these stellar players rock a comedy that could potentially be funny only to a select group of patrons—those who have been through the slings and arrows of creating theater—making their characters just vulnerable enough to appeal to everyone. Lotorto and Goss are particularly flawless in their scenes together, two veteran performers who possess a well-oiled comic timing that recalls such talents as Charlie Chaplin and Harold Lloyd.

"You know how many playwrights it takes to change a light bulb?" Foley jokes to Heidi. His answer, delivered with mock horror: "Change? Who said anything about change?"