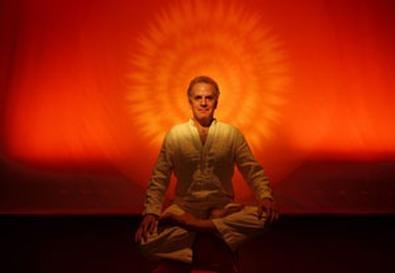 Photo Source: Phoebe Sudrow
When writer, actor, director, and religion major Evan Brenner became interested in Buddhist philosophy, he embarked on a study of the sutras, the oldest surviving Buddhist texts. By chance he was invited to a screening of a filmed theater production of "St. Mark's Gospel," actor Alec McCowen's adaptation of the biblical text. That gave him the idea of devising a theater piece that would tell the life of the Buddha—from his birth, circa 500 B.C., to his death—in the religious icon's own words as they appear in the sutras. Brenner edited the numerous texts into a 90-minute narrative, and his friend John C. Reilly came aboard as director, sharpening the text and making the show more theatrically dynamic. Set and lighting designer Francois-Pierre Couture also joined the project, using impressionistic rear projections on a white scrim to suggest the story's changing locales.

Siddartha Gautama, who became known as "the Buddha," was born a prince, son of the king of his state in northern India. The king consulted his seers and soothsayers about his son's destiny, and some predicted a life of asceticism and renunciation. Displeased by this prospect, the king set out to protect the boy from any teachings that might lead him away from his future as heir to the throne. But as a young man the Buddha-to-be encountered poverty, old age, and death, which led him to go on a quest for understanding. He studied with many masters but found none of their teachings satisfactory. Finally, he hit upon the concept of meditation and poverty as the keys to enlightenment and achieving nirvana.

The text, smoothed and simplified by centuries of oral transmission, possesses a fairy-tale simplicity, austere and restrained. Brenner performs it with the same simplicity and quiet authority, free of distracting mannerisms or regionalisms. Sheela Bringi and Jaeger Smith add richness to the production by providing Indian music, played on traditional Indian instruments.