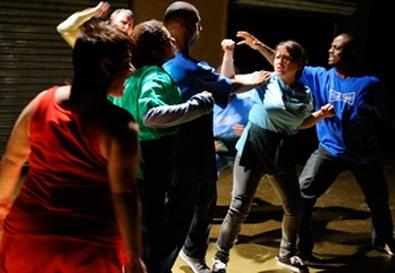 Photo Source: John Luker
I’m a sucker for L.A. stories, particularly stories that are "auténtico," able to zero in on the varied people and disparate neighborhoods of Los Angeles today. With “Café Vida,” Cornerstone Theater Company is starting its latest series of community-based works, the Hunger Cycle. Written by Lisa Loomer and created in partnership with Homeboy Industries and Homegirl Café, “Café Vida” is bursting with the kind of truth, humor, and pain that can only come from a collaboration such as this. It’s a satisfying and often surprising offering. It’s what Cornerstone does best.

Stylishly tossing together narration, music, movement, imagery, and straightforward slices of life on L.A.’s Eastside, director Michael John Garcés works with a large cast of mostly nonactors, people from the Homeboy community who are at risk and working to escape gang involvement. With a central theme of hunger—for "chilaquiles", for corn bread, for “love with all the toppings—the play tells the tale of two homegirls from rival barrios who get a fresh start after prison by growing, cooking, and serving food. They’re Chabela and Luz, played by Lynette Alfaro and Sue Montoya. Neither Alfaro nor Montoya has professional training, but both are absolutely delightful. For the most part, “Café Vida” is filtered through Chabela’s experiences: landing the first job she’s ever had, learning—and mad-dogging—in the kitchen with Luz (as the girls’ co-worker, Felipe Neito is a hoot), navigating new territory with her husband (Jesse Gamboa), reuniting with her angry daughter (Bianca Molina), and trying to keep herself sane by listening to the DJ in her head (Magaly La Voz De Oro, a powerhouse presence with an insanely hot singing voice). Cornerstone’s Bahni Turpin is a terrific guiding force in multiple roles, as are company members Shishir Kurup, Page Leong, and Peter Howard. Each remaining member of this dedicated ensemble deserves a shout-out, as well: Maria Cano, Onna S. Cooper Jr., Amanda Duns, Veronica Duran, Jeanette Godoy, Maria Gonzalez, Andre Hollins, Pita Montellano, Daniel Penilla, Gloria Alicia Tinajero, and Natalie Venegas.

Garcés has made “Café Vida” look great but not too great. Nephelie Andonyadis’ gritty, versatile setting is a fantastic backdrop for neon elements. Tom Ontiveros’ evocative lighting and Bruno Louchouran’s sound design and original composition add just the right driving elements. Kudos to choreographer Ana Maria Alvarez; her imaginative movement is striking (the girl-on-girl tango stare-down is not to be missed). While the play sometimes hits you over the head with its message, Loomer manages to avoid making it too painful. Instead, we’re left with a wonderful taste, from one particular part of L.A., of what it’s like to really live—and to want to live. "La verdad."