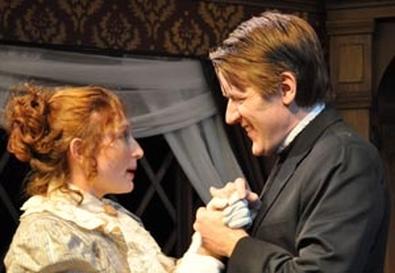 In taking a look at the mutual duties and expectations in a marriage, Shaw gives a fair shake both to the masculine and feminine points of view. A moralistic London minister, Reverend James Morell (Casey E. Lewis), loves his freethinking wife, Candida (Molly Leland), but perhaps takes her for granted. Stirring up the pot is 18-year-old poet Eugene Marchbanks (Michael Uribes). In love with Candida, he sets out to win her heart and rescue her from what he perceives of as a life of servitude and neglect.

Lewis conveys the irritable qualities of the stuffed-shirt clergyman as well as his likability and the suppressed vulnerability of a man who's deeply in love. The qualities of impetuousness and immaturity in the lovestruck Eugene are illuminated in Uribes' captivating portrayal. The rivals are played with sufficient charm to make the competition intriguing. Leland looks lovely in stylish period costumes by Morgan and Courtney Sutton and radiates the poise, glamour, and spunk of a woman over whom men would fight. The other players (Robert Harlan Greene as Candida's opportunistic father, Adam Ferguson as a finicky curate, and Laura Lee Bahr as a repressed typist) offer capable support.

Aaron Morgan's attractive set emphasizes burnished-brown hues. The props and dŽcor credibly suggest a plush home in Edwardian England. Aside from occasional instances of line hesitancy, this is a worthy rendition of Shaw's still-resonant play.