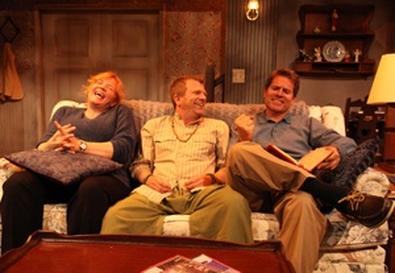 Photo Source: Deverill Weekes
It’s surprising that anyone can concoct yet another black comedy about a woefully dysfunctional family, but give Andrew Dolan a gold star. “That Good Night” features the usual suspects, including a comatose father “turned by God into a Pet Rock,” a mega-religious mother who avoids reality as if it were an annoyed wasps nest, a son who still lives at home and loves getting high, two warring brothers and their unhappy spouses, and a spinster sister who has written a tell-all book about growing up with all of them. There’s certainly not much new here. Nevertheless, by the end of Act 1 Dolan makes magic happen—literally.

Under director Scott Alan Smith’s nurturance, the exemplary cast morphs into a credible family, with every lingering hurt and happy shared memory clearly visible as the O’Dwyer clan gathers to say goodbye to its not-so-dear old dad. John Cragen and Chet Grissom, who even look like brothers, convincingly convey the kind of polar-opposite rivalry that makes people dread going home for the holidays. As their respective bedmates, Keelia Flinn is wonderfully feisty as the one unwelcome nonfamily member, as is Melissa Kite as a onetime swinger whose sultry nature still seethes below her pulled-together exterior.

Elizabeth Sampson walks a wobbly tightrope as the unmarried ad writer who wants to be a good daughter and sister despite stifling what looks to be the constant urge to run away screaming. Bernie Zilinskas has the natural comic timing of someone born into vaudeville as the son pushing 30 who still lives in a room off the kitchen while eking out a living as a clown and shooting up heroin under the gaze of his mother’s oversized crucifix. “Yes to art as salvation,” he proclaims as he secures his red rubber nose for a bar mitzvah.

Still, it’s the senior O’Dwyers who stay with you the most. Judith Scarpone channels the late Frances Bay as a woman whose “capacity not to hear can boggle the mind,” and Leon Russom gives a tour de force turn as the father who claims “God blew my brain apart and scattered the pieces like a vase” and hopes that his troubled offspring become kids again in heaven.

Stephen Gifford’s set is a knockout of suburban hyperbole. As the audience enters the theater from one side of the stage, the inclusion of the outside of the O’Dwyers’ front door and bay window makes patrons feel as if they’re walking onto the set of “Leave It to Beaver.” Jeremy Pivnik’s exceptional lighting and Mary Jane Miller’s spot-on costumes add greatly to the show’s success. Final kudos go to Dolan, whose “That Good Night” resembles what might transpire if Michael Frayn decided to write a kitchen-sink drama but kept the slamming doors.