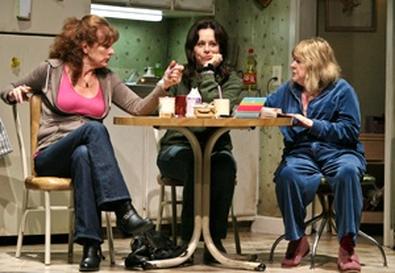 Lindsay-Abaire drop-kicks the audience directly into the cultural context at the outset. “She ever tell you the turkey story?” protagonist Margie (Jane Kaczmarek, beyond praise) asks her boss, dollar-store manager Stevie (the excellent Brad Fleischer), sensing impending termination because she’s late yet again. Regaling Stevie with a well-worn neighborhood anecdote concerning his late mother doesn’t work, so Margie moves from amiable defensiveness to aggressive desperation in a tersely funny and urgent expository scene that subtly sets up Lindsay-Abaire’s ironies.

Director Matt Shakman’s typically expert way with telling details of gesture and niceties of execution is in full flower as he brings the nuances of this parable to the forefront with an invisible hand. His other designers—E.B. Brooks (costumes), Elizabeth Harper (lights), and Jonathan Snipes (sound)—are equally adroit.

Burke’s ability to riotously dither with a dank undercurrent works like gangbusters for Dottie, while Botsford gives tell-it-like-it-is Jean a rich bluntness that nears Melissa Leo territory. Fleischer digs deep beneath the deceptively functional surface of Stevie, and as Kate, the play’s eventually revealed moral compass, Boothe traces an unforced spiral of acute reaction that almost steals the show.

I say almost because Kaczmarek, whose comedic gifts are grounded in the poignancy of a great tragedian, and Tenney, working first with and then against his innate charm with absolute investment, inhabit Margie and Mike with an unwavering honesty that is riveting. So in its offhanded way is “Good People,” a miniature masterwork of the comedy-drama genre.