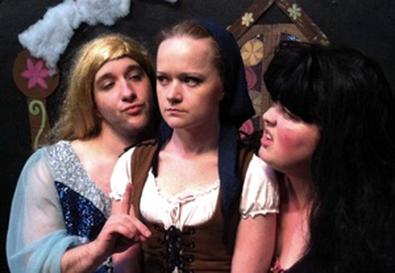 Photo Source: Adam Neubauer
In “The Grimm World,” an amiably demented mash-up of several Brothers Grimm fairy tales, the renegades at Zombie Joe’s Underground ply their twisted garage-theater invention toward family-friendly entertainment. Although the results hardly approach the company’s celebrated deconstructions of Edgar Allen Poe, H.P. Lovecraft, and the Bard, that’s in part because, as the group’s first children’s show, the objective is less in-your-face audacity than briskly entertaining frolic, albeit shot through with the group’s trademark irreverence.

Written by Adam Neubauer and Samantha Levenshus, the show reveals its premise as the audience assembles in the L-shaped seating around the tiny playing area, where Laura De Lano’s set pieces appropriately resemble a grade-school pageant. A minstrel (Brandon Murphy Barnes), the show’s relentlessly chipper tour guide, adlibs in pidgin Renaissance speak, dances with willing attendees, and generally suggests a talk-show warm-up act from the age of chivalry. This mild rumpus might go on all night, until a pig-tailed girl (Dana DeRuyck) plants herself in the aisle and requests a story. Tellingly, she has to cue the minstrel to the details—a recurring motif—and with “Once upon a time” we enter a realm that suggests “The Electric Company” invaded by Monty Python on absinthe and Sudafed.

What most charms throughout the breakneck pace, split-second costume changes, and unexpected uses of the upstairs window that director Sebastian Munoz oversees is the sardonic intersection of the narratives. Hansel and Gretel (Tyler Koster and Jill Johnson) are deposited by their huntsman dad (Leif La Duke) smack dab in the path of a supine, dolly-hoisted Snow White (De Lano, drolly Mittel-European), one story’s start dovetailing with another’s ending.

The various evil stepmothers and witches (all played by Redetha Deason, ruthlessly over-the-top) convey similar raucous bravura, cueing the girl’s skeptical comments about how many dead mothers and vile surrogates populate these tales. Cinderella (Liz Heathcoat) endures her impossible family with snide asides, a frog prince (Jesse James Thomas, possibly the standout turn) croaks and hops his way from the palace well to the dining table of a little princess (Jessica Amal Rice), and so forth, with many a winking in-joke along the way.

Production values are, as ever at Zombie Joe’s, bargain-basement resourceful, from the sharp costumes by Jeri Batzdorff and Heathcoat to co-author Neubauer’s sudden lighting shifts to the computer-assisted handling of the magic mirror (Evan Boelsen). The cast is up to the mischief and clearly having a ball in multiple roles. Favorites will vary, but there’s no denying the scene-stealing campiness of Thomas and Johnson as Cinderella’s stepsisters, or Adam Messana’s slow-burn ire as the overtaxed servant to the prince (Boelsen), or the sheer Soupy Sales–level lunacy of the six human and one puppet dwarfs.

What’s less aerated is the sense of overreach that emerges by the three-quarters mark, as things logjam en route to resolution. Neither the often-hilarious twists nor the darker, less familiar aspects of the Grimm narratives—Snow White’s three accelerating visits from her nemesis, Cinder’s siblings mutilated to fit the slipper, etc—cannot really surprise or shock after the “Shrek” franchise, to say nothing of “Into the Woods.” Still, if “The Grimm World” isn’t the last word on fractured fairy tales, it has sufficient good humor and spirit to leave audiences leaving happily ever after or at least until they get home to real-world concerns.