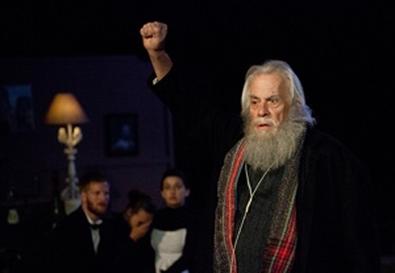 This is key, as “Heartbreak House,” subtitled “A Fantasia in the Russian Manner on English Themes,” was inspired by the great Russian playwright. We are in Sussex, circa 1914, at the title dwelling, a metaphor for the English national psyche where ambiguous characters echo Anton Chekhov’s hapless humans in asking questions that have elusive answers.

Ariadne Utterword (Susan Angelo, having a field day), Hesione’s younger sister, returns today, 30 years since she married into upper-class respectability to escape the bohemian aura at home. In tow is Randall Utterword (Aaron Hendry, marvelously loopy), her smitten brother-in-law, while Ellie’s coterie includes her bankrupt father, Mazzini Dunn (slyly understated David Stifel), and her suitor, Boss Mangan (Alan Blumenfeld, made to order), the industrial tycoon responsible for bankrupting him. More than one romantic and philosophical intrigue emerges and/or reverses before Shaw’s treatise lands in the person of a supposed burglar (Ed Giron, dead-on) and an ominously lighted-up sky.

Director Ellen Geer treats this imposing property with light-fingered comprehension of its requirements, the dialogue cascading with immediacy, here briskly hilarious, there wistfully aching. She has assets in the verdant outdoor venue and the sterling cast, who sport Val Miller’s elegant period costumes like a second skin.

Everyone has the measure of his or her role. Take Hunt, whose every pronouncement crackles and tickles as Shotover, or Geer, whose fluting timbre and reactions are delicious as Ellie, or Angelo, heartfelt beneath the arch façade as Ariadne. Hendry and Lewis bring novel shadings to Randall and Hector, respectively, and Blumenfeld’s native bombast totally suits Mangan. Still, the standout is Marshall, already having a banner summer, who inhabits Hesione with a merger of confidence and vulnerability not witnessed in the role since Rosemary Harris.

It’s a long play that nearly loses steam by the last act, yet the players keep igniting the trenchant ideological kindling of this thoroughly satisfying Shavian treat.