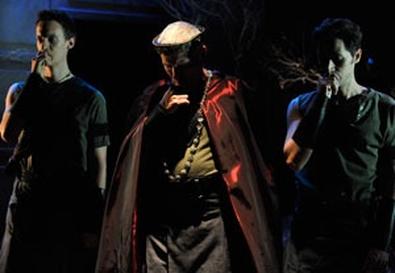 Photo Source: Daniel G. Lam
The dagger strokes of "Macbeth" at the Antaeus Company convey vaulting ambition but variable horror. Director Jessica Kubzansky's intelligent, evocative take on Shakespeare's daunting tragedy of treason and the supernatural is sensible to feeling as well as to sight, up to a point.

As usual, Antaeus double casts the show, giving each performance its own spontaneous aspects. I caught the "Thanes" crew, spearheaded by Rob Nagle and Tessa Auberjonois. As Macbeth, the contemporary-feeling Nagle visually recalls Orson Welles, finding black humor within an expanded dynamic range, although this reveals technique as much as character. He works well with Auberjonois, whose double-edged, specific choices as Lady Macbeth exude an affecting humanity within her feverish machinations.

Standouts in a creditable ensemble are Daniel Blinkoff, who makes a vital, gripping Macduff, overwhelming in reaction to his family's slaughter, and the well-contrasted witches of Lorna Raver, Jane Carr, and Saundra McClain, who suggest amiably demonic "Lemony Snicket" refugees. Ned Schmidtke imbues Duncan with resonant authority, his raffish Seyton seeming like another actor, just as Kimiko Gelman's intensity as Hecate is notably different from her Lady Macduff, first acerbic, then frantic at the murder scene (easily the production's most chilling segment). Christian Barillas underscores Malcolm's innocence and noblesse oblige, and Jack Lancaster's unfussy delivery as Fleance and Macduff's son indicates a younger actor to watch out for.

True, Ramón de Ocampo makes a clear-spoken yet somewhat collegiate Banquo, and Daniel Dorr and Brian Abraham, as the hired assassins, are physically ominous but voice their lines with an unplaceable cadence that isn't exactly unsettling. That typifies the real issue: For all its carefully chosen details, the hell on display is intermittently less murky than dutiful. For instance, Jessica Olson's costumes are acceptably utilitarian but also eye-dulling in the gray kilts and distracting in the one-sleeved gowns, and Buderwitz's stone set pieces clash with the wood-planked floor.

These are, admittedly, decorative quibbles, but the visceral punch varies in direct measure to the degree that atmospherics are cued by the histrionics. The motivational conceit and the witches' involvement aren't automatically conjoined, the escalating counterstrategies of the noblemen flirt with declamation, and Macbeth's final, almost casual resignation feels anti-climactic. Still, if this "Macbeth" isn't as consistent with its black and deep desires as with its memory of a rooted sorrow, it's an admirable stab at a famously cursed property.