LA Review: 'The Many Mistresses of Martin Luther King' 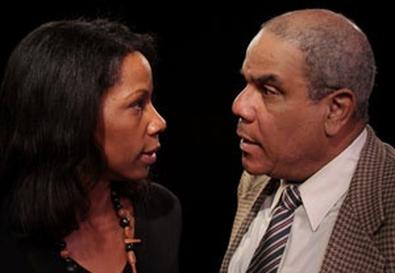 Photo Source: Maia Rosenfeld
Hot-button issues surrounding racial tension in America are plentiful in Andrew Dolan’s world-premiere play “The Many Mistresses of Martin Luther King,” but don’t go expecting a roman à clef exposé about the martyred civil rights activist. The show might be described as “Guess Who’s Coming to Dinner” on steroids, re-imagined for the 21st century and infused with a subversive Rush Limbaugh audacity. Though the challenging script could use some smoothing out, director Rod Menzies’ consummately acted production is intelligent and provocative.

Dolan’s darkly funny script sometimes compromises lucidity in its relentless use of a time-shifting structure whose purpose isn’t always evident. The action keeps returning to a cocktail party thrown by Simon and Lashawna at which Augustus and Janine are the guests. Intermittent segments feature the academic characters standing at a lectern to the side of the stage delivering monologues.

In his examination of racial differences and their complex ramifications, Dolan clearly values an open-minded consideration of opposing viewpoints over a pat adherence to popular liberal beliefs. Thus it’s important that Simon’s voice stay credible. Casnoff faces the formidable task of making a protagonist with a touch of obnoxiousness somewhat worthy of empathy and succeeds admirably. Leigh scores strongly as Lashawna, who acts as her husband’s foil as she tries to diffuse his indulgent opinionating with a degree of sensitivity to their guests. Carrasco and Moreland give finely nuanced portrayals as a couple facing marital problems. As the ne’er-do-well youngster demonstrating a surprising amount of common sense, Perkins is funny and likable.