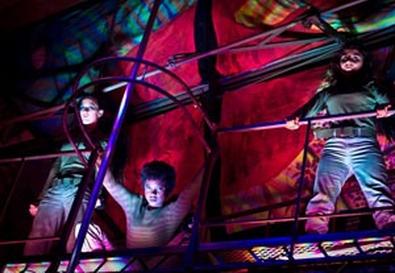 Stronger in creating an intriguing atmosphere and moments of soaring lyricism than in spinning a fully cohesive tale, Rivera's script kicks into gear by introducing Marisol Perez (a vigorous Carolina Castro), a 26-year-old Latina copywriter for a publishing house. She is attacked on the subway by a smarmy vagrant (Dan Evans) swinging a golf club but is rescued from this attempted assault. Marisol is subsequently visited by a gutsy guardian angel (the superb Alex Marshall-Brown, in a small but colorful role), who informs Marisol that she might not be able to protect her because the angel has joined other rebels in a battle against a senile god. Fires and pollution are ravaging the city, the food and water supplies are contaminated, and violence and crime rule. Among the deranged characters are a vengeful gun-toting woman in furs (Jennifer Sorenson), who was tortured by police because her credit card went over its limit, and a homeless burn victim in a wheelchair (Michael Allen) looking for his lost skin. Sorenson and Allen offer deliciously creepy portrayals, matching the overall excellence of the ensemble cast.

Dark humor punctuates the gloom-and-doom narrative, though Rivera clearly wants to make sobering points about social injustices, ecological damage, and abusive governmental policies alongside loftier ruminations on spirituality and moral malaise in the urban jungle. Though the hyperactive proceedings come across as more of a kicky carnival thrill ride than an incisive cautionary tale, the production is consistently fascinating, and the game cast goes the full mile in supporting the memorable effort.