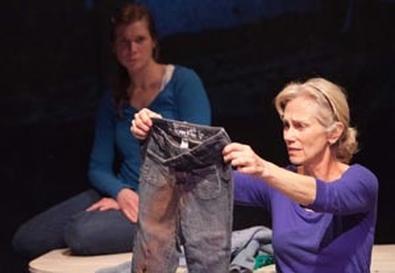 Photo Source: John P. Flynn
When 23-year-old Rachel Corrie was run down in the Gaza Strip by an Israeli Defense Forces bulldozer while acting as a human shield to prevent the demolition of a Palestinian home, a huge international and highly partisan controversy arose. The Israeli government declared that the driver of the bulldozer was unable to see Corrie and the incident was an accident. Corrie's fellow activists from the International Solidarity Movement flatly contradicted this and claimed that the act was deliberate murder.

Now, in "Sarah's War," playwright Valerie Dillman has written a fictionalized account of Corrie's death and the Israeli-Palestinian conflict that she hopes will be "less polarizing" than other versions, focusing as it does on the conflicted responses of Corrie's mother and other relatives.

Dillman's play is provocative and full of affecting scenes. The title character (Abica Dubay) is depicted as an idealist so naively passionate that her death seems almost inevitable. Sarah's mother, Ann (Terry Davis), is tormented by conflicts and a desperate need to know what really happened. And Danny, the driver of the fatal bulldozer (Will Rothhaar), becomes a tormented figure with deep-seated doubts about the justice of his mission.

Dillman's decision to tell her story obliquely, with a nonlinear narrative, sometimes makes it hard to grasp the facts or to know which characters we're meant to focus on. Nevertheless, director Matt McKenzie has mounted a briskly effective production, giving equal sympathy to all the warring factions. Dubay eloquently depicts Sarah's passionate dedication and her distress and confusion when her family and local Palestinians misunderstand her actions. Davis carefully maps the anguished mother's shifting attitudes, and Rothhaar captures the pain of the Israeli soldier.

There are also fine performances from Lindsey Ginter, as Sarah's father; Allan Wasserman, as her loving but disapproving uncle; Adria Tennor Blotta, as the sister who bitterly resents Sarah's involving their family in events she regards as none of their business; Dina Simon, as a Palestinian woman who regards Sarah as a foolish, misguided interloper; and the rest of the fiercely dedicated cast.