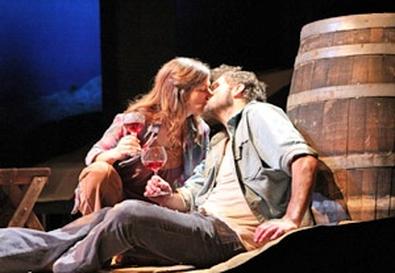 Photo Source: David Jaworski
Sheila Callaghan has created a great premise and fascinating characters, her writing intertwining wine and blood and sex as painful but necessary life forces. So why does this production not fully reach its target? It's possible that her framework—likening her modern-day story on a fertile Greek island to myths and legends of the ancients—overly distances the audience from the characters. What could have deeply affected us looks like artifice, even considering the crucial disclaimer at the top of the play that this is "a fundamental impossibility." But all is so very well crafted by those involved, despite this caveat, that this production is well worth seeing.

The quartet of actors is superb, each outdoing the others in refining their characters and living honestly in the space—created by Sibyl Wickersheimer as a breezy retreat redolent of the Mediterranean. Silas Weir Mitchell plays a vintner, formerly a Berkeley radical, currently married to a Grecian. Olivia Henry is said wife, who at first seems like stereotypical trouble but gradually appears as the most stable of the group. To topple this not-quite-stable relationship, his former lover arrives on the island, in a fascinating performance by Alina Phelan that goes from hyperpulsating to reflective in a smooth arc. And as a young creature who serves various needs, Alana Dietze beautifully unveils undercurrents of bisexuality and of teenage misery.

Director Paul Willis creates a highly energized, highly mysterious world. Moments are played out with unleashed words and actions and then instantaneously replayed cloaked in refinement. Shattering glass never fails to startle us. The actors seem fully armed with context and subtext. And most interesting, Willis lets his actors sit in darkness for a moment after the lights go out on a scene, giving them and us a moment to think. Only the time Phelan spends in trying to re-clothe herself, after her character spends the night naked in the vineyards, drags on far too long and in uncomfortable silence—although even that gives us a chance to admire Tom Ontiveros' lighting design.