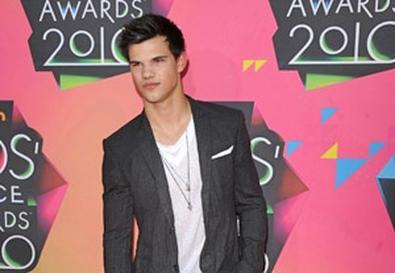 "I have to admit I have always dreamt of winning one of these orange blimps," said Lautner.

The fan-favorite ceremony's host, "Paul Blart: Mall Cop" actor-comedian Kevin James, kicked off the show by performing a hip-hop dance routine as Adam Sandler serenaded him from above while dressed as an angel and fountains of green slime spontaneously gushed on the first few rows of the audience. James said more than 115 million votes were received this year.

Katy Perry, wearing a bright blue wig and skintight flowery dress, was blasted with slime when presenting the favorite movie actress trophy to Miley Cyrus. The gooey "I Kissed a Girl" singer chased the "Hannah Montana" actress around the stage, but co-presenter Jonah Hill grabbed Perry before she could embrace the 17-year-old singer-actress with a slimy hug.

"I can't see anything," complained Perry. "Why does it taste like boogers?"

Other favorites included "Alvin and The Chipmunks: The Squeakquel" for movie, "Up" for animated movie, Jim Carrey for voice from an animated movie for "A Christmas Carol," "Mario Kart" for video game, "iCarly" for TV show, "American Idol" for reality show, "SpongeBob SquarePants" for cartoon, Dylan Sprouse for TV actor and Selena Gomez for TV actress.

"I'm the luckiest girl in the whole world," said Gomez.

In the music categories, the winners were Black Eyed Peas for music group, Jay-Z for male singer and Taylor Swift for female singer and song for "You Belong With Me." Favorites in the sports categories were two-time Olympic gold medalist volleyball player Misty May Treanor for female athlete and 20-year-old skateboarder Ryan Sheckler for male athlete.

"This goes right in the trophy case," Sheckler said holding up his blimp.

First lady Michelle Obama won the ceremony's "Big Help" award for her "Let's Move" campaign to cut down on childhood obesity. The honor is part of Nick's own "Millions on the Move" campaign. Over the next few months, the network will feature public service announcements to encourage kids to stay active and promote activities that help the environment.