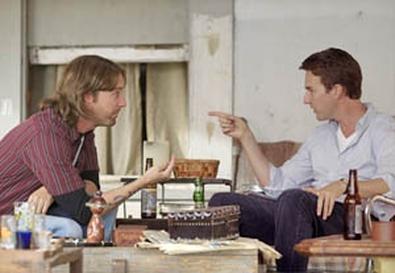 Tim Blake Nelson's utterly misconceived "Leaves of Grass" is awash in lofty philosophical allusions and musings—the Walt Whitman title of the movie is a tip-off. But there are also references to Aristotle, Socrates, and Shakespeare. Order versus chaos, tragedy versus comedy, the distorting nature of memory, and the meaning of life are among the heady topics explored. That's all fine and dandy if the story were plausible and the characters resembled human beings. But, with one or two exceptions, they don't, and their relationships and actions are absurdly contrived.

Brown University classics professor Bill Kincaid receives notice that his estranged identical twin, Brady (both played by Edward Norton), has been murdered. Bill reluctantly returns home to his white-trash roots on the outskirts of Tulsa, Okla. There he discovers he has been duped; his low-IQ thug brother is alive and well and involved in the local drug trade. Within short order, Bill is embroiled with the traffickers, headed by a practicing Jew and supporter of Israel (Richard Dreyfuss). There's also an offensively drawn Jewish orthodontist (Josh Pais) who gets into the fray. On the home front, Bill is attracted to a sensitive, nature-loving poet (Keri Russell) who has chosen to live in the backwoods to have a simpler life. He also faces his aging, hippie mother (Susan Sarandon), now relegated to a nursing home, whom he abandoned years earlier. Brady's beer-guzzling, pot-bellied, monosyllabic pals are front and center. Dripping in blood and gore, this flick is caricature city.

Undoubtedly, the movie is a vehicle for Norton, and he pulls off his twin roles effectively, though he is more convincing as the sensitive, erudite brother. It's a subtler character to begin with, while Brady is a one-dimensional figure and can be evoked through broad strokes. Russell is likable as the country-loving city girl, although a scene featuring her catching a fish with her hands and then gutting it strains credulity—and is not easy to watch. Nelson is excellent as a hillbilly lowlife with a soul. If only his writing and directing skills were on par with his acting.

The film's premise just doesn't compute. It's improbable that Bill and Brady grew up in the same environment and turned out so different. Their mother would not be living with such trigger-happy yokels, nor would Russell's character. And, most problematic, in the highly unlikely event Bill returned home at all, once he realized he had been conned, he'd be out of there in a heartbeat. And though the film is supposed to embody tragic and comic elements, neither works. In the end, it's just irritating and numbingly dull.