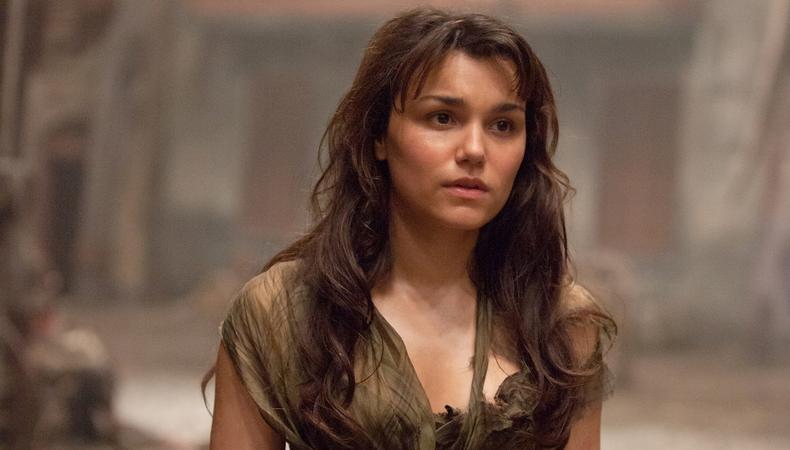 Samantha Barks made her film debut in a big way when she blasted onto screens at movie theaters across the country on Christmas as Éponine in Tom Hooper’s adaptation of the musical “Les Misérables.” She chatted with Backstage about how she landed the role, taking it from stage to screen, and the best advice she has for aspiring actors.

You’ve played the role in the West End before appearing in the film. Were there some new things you discovered in the process of taking it from stage to screen?
Samantha Barks: There are a lot of things you can get away with because it’s a stage musical. In this [film], you have to be more clued in to the details of it, especially with the love triangle. It’s fairly loosely sketched and that works on a stage, but some of it didn’t make sense when it adapted to the film…There’s one change where in the musical, Cosette gives Éponine the letter to give to Marius. Now, the sort of effect that has on her character makes her a much better person, a much nicer person. But really in [Victor Hugo’s] novel she isn’t. She isn’t that clear cut. She’s grown up in a world of twisted morality…and so she’s a criminal essentially. I think what we did here is that we changed it so that Cosette actually leaves this letter for Marius and Éponine steals it. And she’s got this conflicted choice as to whether to do the right thing for the greater good and give Marius this letter or keep it so he won’t find her and he will go to war. And that’s what she chooses to do. She, in the end, gives him the letter and is kind of redeemed by her love for him but it proves that she will do anything for him.

Can you share a little about how you were cast?
Barks: Because I played the role previously in the West End and also in the 25th anniversary, my name was in the mix for it, as were many many girls and so that was where it started for me. And then after that followed 15 weeks of a grueling audition process. Going in and out and really being put through my paces, which I totally understand because it was a gamble to cast me in this because I have no screen experience. I really needed to prove that I could translate this role onto the screen, and thankfully they did believe in me, and I’m so grateful for that. I was onstage at the time playing Nancy in “Oliver!” and the producer Cameron Mackintosh walked onto the stage and announced that I’d be playing Éponine in this film. It was the most shocking way you could ever find out you got a role ever.

How did your theatrical training help you with this film?
Barks: What you have to do when you do a film is rely on your instincts a lot. The truth of the character will show, and every detail you put in there will read because the camera’s so close. And I felt like my experience in theater certainly helped me in this film because, although I knew nothing about this world of film, I knew a lot about the character and I knew a lot about the piece and I think that’s a really good starting point. The more information you can gather, the more you can sit back and trust your instinct more and play the truth of the character.

How did you keep yourself healthy for a live-singing aspect?
Barks: For “On My Own,” I’m up at 5 in the morning, and then I’m singing. My teeth are covered in brown paint and I’m singing in the rain. I have a corset on. You’ve got all these elements that are added to it so it’s challenging. Also, you’ve got sniffing and crying, and you’ve got to kind of allow those real situations to affect your voice because I think in that lies some raw emotion that’s really exciting to discover. You’ve got to leave your vocal vanity at the door a little bit and just go with it. But we were all so well behaved. I didn’t drink any alcohol. I drank a lot of water. We were a very civilized cast. One might say boring, but it was what we needed to do.

What was it like working with director Tom Hooper?
Barks: He is a genius. And he’s got an incredible eye for detail. He’s very literary. He was in love with this idea of adding more texture from the book…What he’s fantastic at is developing it with you. Guiding you and helping you but also allowing you that freedom to make artistic choices. For instance, with “On My Own,” we arrive onto the set, and he was like, “OK, go. Do what you like. You can walk around. You can stay there. You can sit there. You can do what you like.” And so for me, it was completely freeing experience of being able to choose where I wanted to go, how I wanted to set it, how I wanted to sing it. I could do it softer. I could speak it if I wanted. You had ultimate freedom, and that’s what I found incredible about him. He’s so intelligent. And his eye for detail means you felt thoroughly supported to make those choices because he’s so smart. I felt so lucky to have worked with him.

What advice do you have for aspiring actors?
Barks: I think that you need to not ride the wave of emotions too much. Don’t dwell in your failures, but also don’t get too over excited at your achievements. If you get too proud of your achievements... I don’t know, I just feel you get wrapped up in a world that doesn’t exist. I think you should maintain a balanced mind. And then work your ass off as well.

Watch Barks receive the news that she’s been cast below!