Let Me Down Easy 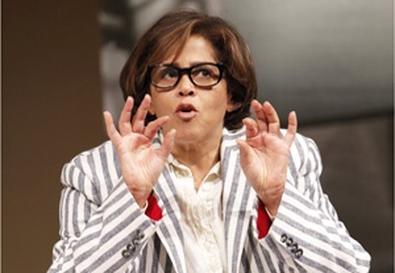 Anna Deavere Smith continues her chronicle of American life in "Let Me Down Easy," probably the most heartfelt example of her unique brand of theater, which combines journalism and performance by employing a script based on verbatim transcripts of conversations with dozens of real people on a single theme. Smith plays all the characters, capturing their physical and vocal traits as well as their passions and intellect, with the aid of versatile lighting by Jules Fisher and Peggy Eisenhauer; simple, suggestive costumes by Ann Hould-Ward; and a silent stagehand.

This new work, directed with a sure hand by Leonard Foglia, goes beyond any of Smith's previous shows, which centered on political or social upheavals such as riots in Brooklyn ("Fires in the Mirror") and L.A. ("Twilight: Los Angeles, 1992") or the relationship of the press to our leaders ("House Arrest"). In "Let Me Down Easy," she addresses a much more fundamental issue: how we relate to our bodies through sports, sex, injury, illness, and finally death.

It's a fascinating journey as Smith leads us from the strain and exhilaration experienced by athletes like cyclist Lance Armstrong, boxer Michael Bentt, and bull rider Brent Williams to the assaultive diseases fought by former Texas governor Ann Richards, movie critic Joel Siegel, and lesser-known patients of Yale New Haven Hospital. In between are ruminations on sexuality by writer-activist Eve Ensler, contemplations of mortality by supermodel Lauren Hutton, and harrowing accounts of our dysfunctional health-care system by a slew of frustrated medical professionals.

Smith captures every hesitation and search for the right word as well as every pain and adrenaline-induced rush of her interviewees. She never condescends to them, but allows us to make our own conclusions. There are screamingly funny moments, as when Smith's aunt recalls the startlingly unusual last words spoken to her by a dying sister, and heartbreaking ones, such as the recollections of a South African orphanage director about her AIDS-infected charges.

As the nation debates health-care reform, "Let Me Down Easy" removes the high-decibel name-calling taking place in Washington, D.C., and at town hall meetings. Smith lets us down easy into complicated issues. This stunning 90-minute essay in play form should be required viewing for tea-baggers, progressives, and anyone who has a body.