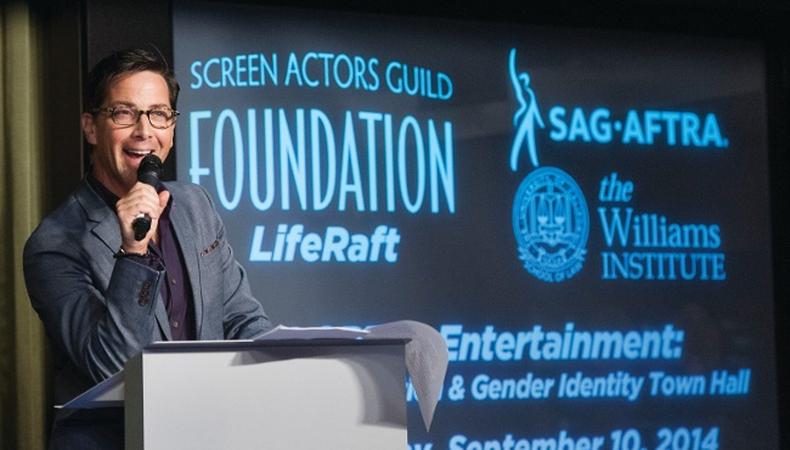 On two coasts and via livestream, the SAG-AFTRA LGBT Committee, SAG Foundation, and UCLA Williams Institute convened Sept. 10 for a Town Hall titled LGBT in Entertainment: Sexual Orientation & Gender Identity, an insightful discussion of the problems still facing LGBT actors. Based on the findings of a study administered to almost 6,000 SAG-AFTRA members by the Williams Institute, the event focused on a basic question that has never been legitimately answered until now: Does LGBT discrimination exist in the professional entertainment industry?

According to scholars M.V. Lee Badgett and Jody L. Herman, the answer is yes. Formulated survey answers given in fall 2012 reveal that 20 percent of gay men and 13 percent of lesbians working in film, television, and theater have experienced harassment, and more than half reported hearing hateful or discomforting comments. Compared to gay or lesbian actors, bisexual actors were only half as likely to report discrimination. More significant, many non-LGBT participants also admitted to witnessing instances of such discrimination. A panel of SAG-AFTRA members agreed that such biases from directors, producers, and agents prove worrying for actors.

“Coming out of the closet is a bitch,” began featured speaker Dan Bucatinsky. “It takes courage, self-acceptance, and resolve.” In his speech, he traced public acceptance of LGBT presences in pop culture, citing the influence of “Will & Grace” and the honesty of Ellen DeGeneres, Elton John, and Neil Patrick Harris. Bucatinsky, who won an Emmy Award for playing a gay character on “Scandal” last year, marveled at how far we’ve come. “Stay in the closet if that is working for you authentically,” he said. But considering how coming out affected his own career trajectory, he concluded, honesty makes better actors.

Badgett and Herman’s study confirmed some of the perceptions surrounding LGBT performers, who are in fact less likely to have representation or be out to those with decision-making power.

While nearly 75 percent of respondents said they have not been offered a gay, lesbian, or bisexual part but were open to it, 17 percent of heterosexual actors stated they did not want to play LGB characters, and 4 percent of survey respondents feared they would be typecast in the future if they accepted such roles. “The study won’t create change by itself,” said SAG-AFTRA Chief Operating Officer Duncan Crabtree-Ireland. “But the reason why we put in the resources to do the study is because there was sort of a mantra coming back to us as we were having [these] conversations: Is this really a problem?”

Equipped with hard evidence that progress is still possible, the panels in New York City and L.A. discussed solutions moving forward. Traci Godfrey and Jason Stuart, co-chairs of the LGBT Committee, spoke passionately about incorporating LGBT themes into discussions with writers, producers and advertising executives. “We have to change one person at a time,” said Stuart. “We want to have the same opportunities as our straight counterpoints.”

Moderator Gary Riotto fielded questions from the audience in L.A. and through Twitter with the hashtag #SAGF. LGBT panelists Dana Kristen Vahle and Parvesh Cheena detailed their experiences in recent years, indicating sexual orientation and gender identity are becoming less and less of an issue on set. Adam Moore, the union’s national director of equal employment opportunity and diversity, encouraged LGBT actors to reach out, closing the event with words to live by: “Stay loud. Stay proud. Stay involved.”

Jack Smart
Jack Smart is the awards editor at Backstage, where he covers all things Emmy, SAG, Oscar, and Tony Awards. He also produces and hosts Backstage’s awards podcast “In the Envelope” and has interviewed some of the biggest stars of stage and screen.
END_OF_DOCUMENT_TOKEN_TO_BE_REPLACED