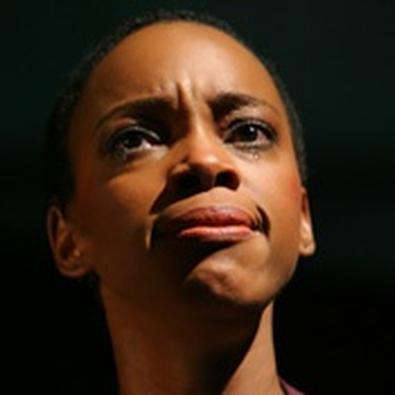 The sensational 1980 trial of the Miami police officers accused of murdering Arthur McDuffie, an African-American insurance salesman and former Marine, enters the narrative of Liberty City late in the work. April Yvette Thompson, who co-wrote the 90-minute autobiographical one-act with Jessica Blank (who engagingly directs), has until then spent her time and formidable energy weaving together a series of characterizations of family figures remembered from her youth. All are well-delineated, but few are as vivid as Thompson playing her father, Saul, a bombastic political activist and intellectual with a radical edge.

Indeed, until Thompson reaches the catastrophic results of that trial — the officers' acquittal on all counts, igniting days of devastating riots — Liberty City has seemed easy to categorize as another earnest work in which one actor showcases her versatility, acquiring and disposing of accents, walks, and speech patterns as needed, though to what end remains unclear. Then Tal Yarden's video design, projected above Antje Ellermann's set, begins showing news footage from those riots — this is, after all, documentary theatre — and the air, like a fist, fills with tension. This is the play's raison d'etre — a palpable dramatic moment.

Awaiting it, savor Thompson's ingratiating characters. There's her precocious 6-year-old younger self, hauled into the principal's office at an exclusive, mostly white private school on suspicion of making false statements about her ancestry that turn out to be true. This earns young April the aggressive defense of her father — another chance for Saul to sock the establishment with a black eye.

And there's Thompson's sassy Aunt Valerie — a party girl who, at Saul's urging, becomes an elected alderwoman for four years and who later gets addicted to crack. There's Lamarr, a 6-foot-6 drag queen. And there's Aunt Carolyn, the wonderfully cranky Bahamian woman who raised Saul. She comes from an island called Eleuthera, where slaves en route to the United States, Saul tells April, were once chained up, exposed to the elements. In one scene, Saul even ties April, a bit older by now, to a rock, linking her viscerally to her forebears as well as to what fuels Saul's outrage, salty language, and activism. That scene is as well done as the entire arc of Thompson's mother, Lily, who is 13 at the top of the play, with a seemingly limitless future before her. At the end, worn down by her marriage to Saul, she leaves him and finds religion.

But it still requires the riots for all of Liberty City's strands to coalesce. Lily is trying to get home via bus, but all the avenues in and out of the Liberty City neighborhood are blockaded by police. Though separated from his wife and children (Thompson has a younger brother), Saul is also attempting to make his way to them, only to be picked up by the police and hauled away. Somehow Thompson and her brother make it home, where they are alone to hear the sounds of gunshots and fire as their beloved community is consumed by the politics of rage. Thompson's whole family — though especially her father — was intent upon making sure she understood, at the earliest possible age, what it means to be black in America, what it means to struggle for economic and social equality. Being chained to a rock for 15 minutes was one way. Surviving an urban riot was another.