Is There Life After High School? 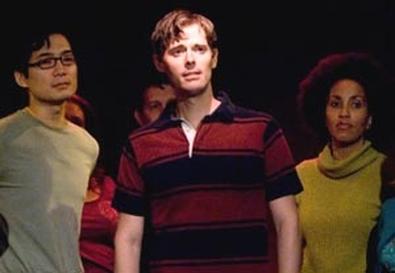 When "Is There Life After High School?" closed in 1982, after 12 performances and 48 previews, one theory for its brief run was that the producers chose the wrong venue. An intimate revue about everyone's high school years, based on the popular Ralph Keyes book (adapted by Jeffrey Kindley), with small stories, soft-rock Craig Carnelia songs, and a no-name cast, was not a natural fit for the Ethel Barrymore Theatre. Maybe Off-Broadway, in a cozy house, where the high school memories could really wash over the crowd, it might have more resonance.

Now, as Opening Doors Theatre Company revives "Is There Life After High School?" on a teeny stage at the Duplex, that theory gets put to the test. And the piece—aided perhaps by an audience consisting largely of the cast's friends and a two-drink minimum—does turn out to have more charm and immediacy than might have been found at the Barrymore. Kindley's book and Carnelia's lite-FM score cover predictable subjects: High school, it seems, was mostly about getting noticed and getting laid (or not). It's a hit-or-miss hodgepodge, with some sketches feeling too specific and others too generic, and too many of Carnelia's songs sharing the same beat or similar sorry-grateful nostalgic emotions.

But as a showcase for fresh talent, much of which looks like it hasn't been out of high school all that long, it does the job. Heather Jane Rolff doesn't just sing "Diary of a Homecoming Queen" in excellent voice; she really acts it, building the regret of a popular schoolgirl turned faded housewife to a shattering climax. Doug Chitel portrays a working-class punch-drunk kid so convincingly that I refuse to believe it's not his actual persona. Austin Ku invests "High School All Over Again" with an eloquent frustration that every kid who wasn't one of the in kids will identify with vividly. And Marcie Henderson—well, she's a star waiting to happen.

Choreography? It's credited to Edward Carignan, but don't expect much on a stage this size, especially as Jeremy Gold Kronenberg's direction often has cast members just standing around, taking up precious space.

"Is There Life After High School?" feels haphazardly assembled, with large chunks of high school missing entirely: things like driver's ed, extracurricular activities, and parents. But as a showcase for some major musical theater talent of the near future, it gets a solid A-minus.