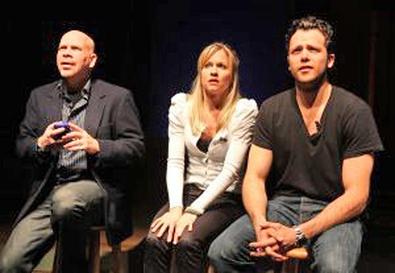 In watching this satire of moviemaking, one can't help but recall predecessors in the genre such as David Mamet's "Speed-the-Plow" and scathing films such as "S.O.B." and "The Player." The problem with Susan Rubin's occasionally amusing but primarily disjointed new comedy is that as a supposed send-up, it never draws much blood. Furthermore, it half-heartedly mixes in elements of rom-com. In the end, both the skewering of film studios and the conventions of love stories get the short shrift. Director Mark Bringelson has cast capable actors, and he keeps the pace brisk—the best things he could do under the circumstances.

The premise sounds promising. When a team of Hollywood players and wannabe players get together to create a film musical based on the Boston Tea Party of 1773, the project has the whiff of a disaster. Spearheading the endeavor is impetuous Lucy (Heather Marie Marsden), who claims she is a descendant of a key figure behind the historic revolt and that she possesses an authentic journal of the event. She calls upon her producer uncle, Jeremy (Jason Stuart), to sell the project, and he secures a buyer in studio mogul Angela (Denise Dowse). Angela insists her young protégé, Christopher (Stewart W. Calhoun), an enthusiastic but unproven young whippersnapper, compose the score. And the screenwriter, she insists, must be the temperamental John (Nick Mennell). Against the odds, two affairs commence: Jeremy with Christopher, and Lucy with John. Questions of loyalty surface as characters stab each other in the back while professing their love. Meanwhile, details about Jeremy's mother, an over-the-hill movie queen, take the story on unnecessary tangents. Even more jarring are projected film segments of the characters, which add nothing but time to the evening.

Stuart struggles with an underwritten role, which allows little for him to do beyond acting blustery. Dowse has good moments as the tenacious but likable dealmaker. Mennell and Marsden are attractive and appealing, but the motivations written for them are fuzzy and unconvincing. Calhoun projects a natural charm, which works for him in this goofy role,