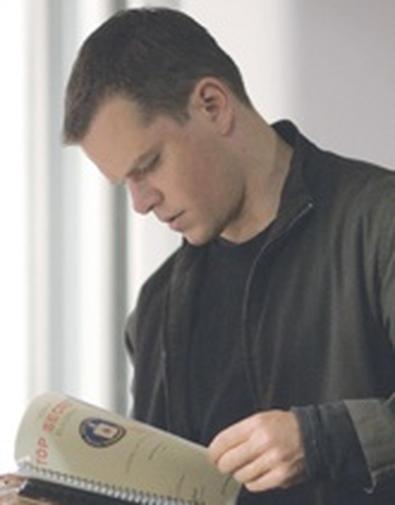 "How do you memorize all those lines?" We've all heard that innocuous question, smiled, and answered with a witticism. But no matter how often we brush the matter aside, memorization is important. How each of us goes about getting lines down is a matter of taste, technique, and brain function. These are beyond the scope of this article. Of more interest is how to deal with the angst we cause ourselves by not having our lines.

Every new actor should rest assured that forgetting your lines in the first or even the second take is perfectly acceptable. No one cares. Such behavior is certainly not a sign of your inexperience. The director, the crew, and the other actors have seen this happen a thousand times and accept it as part of an actor's rehearsal process. However, everyone gets apprehensive when, while in the process of forgetting your lines, you begin to vocally curse yourself out for your shortcomings. They fear that when an actor starts kicking him- or herself, it could be the first symptom that he or she is spiraling out of control. The worst-case scenario might mean a mental block that will utterly paralyze the performer, and production time will be squandered. In a perfect world with more preparation time, this would rarely happen. When working on a play, we have at least a month to get the words from short-term memory to long-term memory. Don't be frustrated that you can commit all of Hamlet to recollection but not two pages of ER. These are different mediums with different time schedules. The pressures of the TV, film, or commercial workplace are such that every one of us has had a problem holding on to dialogue. It will happen to you. When it does, welcome to the club.

The best advice is, when it happens, just laugh it off — if you can. I suggest a funny face, a raspberry, a bon mot, or just not referencing it. If you don't care about your forgetfulness, no one else will either. Remember, the final performance counts far more than getting the lines letter-perfect. If you know that a word or phrase is just out of reach, write it down where you can see it while filming. There's no shame in that. We all know how well this worked for Marlon Brando; he had his lines written everywhere around the set. An old remedy for stuttering is to put a pencil in your mouth and repeat the word or lines a dozen times. Of course, we can't say enough about rehearsing the lines at home. Do it so often that you and whoever cues you are sick of them. It's obvious when an actor hasn't done his homework on a scene. But forgetting lines isn't necessarily one of those signs. If you know you have them, you won't stress out, and the brain vacation will most assuredly breeze by.

Not All Alone in the Moonlight

If when you arrive at work you have doubts as to your memory, there are several prophylactic measures available to you. First, while you are initially rehearsing the scene with the director, don't try to do it by rote. Rather, having the miniature sides they give you in hand, stay eye to eye with your fellow actors, and use the sides when needed. This will help indicate where the potential amnesia may occur. Then, while the camera crew is lighting the scene, you can approach the continuity person — usually found near the video monitor — and ask him or her to rehearse the lines with you. Continuity is often very busy, but it is part of this person's job description to run the lines with actors. Ask, and you should be helped. It's the continuity director who will answer you if you are driven to say, "What's my line?"

Another remedy is to approach the actors you just worked with and see if they would mind rehearsing the scene. You may get your head handed to you if you are working with a prima donna, but my experience is that most actors are as eager as you are to go over the script. Hearing each other's performance spurs the creative process. Their choices will help you with yours.

Lastly, production has sometimes hired a dialogue coach or has a second assistant director to help with lines. It's worth asking if there is someone like that on set. But you will have to wait your turn if the series regular has gotten to him or her first.

The Corners of Your Mind

The reason that lines you once knew like the back of your hand disappear on a soundstage is that a set will invariably feel alien. This subconscious turbulence tips the balance of your comfort zone. Get used to all the unfamiliar: the scrim, the straight-backed chairs, and the room tone. Making yourself at home on a set will focus your concentration on working with your fellow actors and what you are saying to them. While the crew is lighting, ask if they will allow you to rehearse your blocking. A movement or a piece of blocking will often prompt you to say what is needed. That way you get used to all the new stimuli that may distract you once the camera starts rolling. This is especially easy to do if you find you must wait when you arrive on location and the set for your scene isn't being used. If that's so, rehearse the lines out loud.

It is enormously comforting to remember that the first bit of shooting on a film or TV episode is the "master" shot. It's the one that sets the geography of a room. It's rare that any but small bits and pieces of a master are included in the final edit. This means you can consider the shooting of the master to be a rehearsal on camera; if you are going to go dry on lines, that's a good time to do it. No one cares much about line perfection there.

Late or changing scripts exacerbate the problem. The reality is that, increasingly, a finished script isn't delivered to your door until a day or two before an episode or a commercial begins shooting. Sometimes it arrives even on the morning you begin performing or while you are already on the set. The pressure can feel immense when you have only 24 to 36 hours to memorize your role. Scripts are late because writers are often behind in getting their assignments finished; every year there seem to be more network and studio notes regarding story lines and dialogue, which the writers must then take into account. Late scripts are not only a problem for the actors; they're even worse for the designers, who must create a set or a costume overnight. If you are working a sitcom, be absolutely prepared to get radically new lines every day of rehearsal. This may extend as far as getting new lines between every take. The rewrites usually have nothing to do with what you did in rehearsal that day but with the aforementioned notes from the studio or network.

Experience teaches us that not all sets are equally stringent about getting the memorization exactly right. Some TV and commercial sets are very inflexible, while some film sets are not. In TV, writers are often producers and run the show. Some writer-producers want even their commas respected; some just want you to make their intentions felt. Conversely, writers are often forbidden on film sets, and thus being letter-perfect is rarely enforced. The series regulars and the film stars definitely will have more leeway than you will. Let it go. Just keep your head down and do your work.

Armin Shimerman has more than 100 film and television credits and has been a series regular and guest star, in addition to his stage work in Los Angeles.