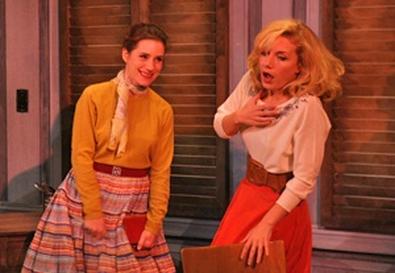 Peter Nichols' latest play, "Lingua Franca," is a deceptively sedate, neo-Chekhovian character study of misfit language teachers at a private school in mid-1950s Florence, Italy. But just as you start to think that the experience is never going to transcend pleasant, Nichols delivers a surprise haymaker that shows just how crafty he's been. By the time the dust settles and you're heading out of the theater thoroughly unsettled, it's clear that the acclaimed author of "A Day in the Death of Joe Egg" and "Privates on Parade" is functioning in top form.

A lingua franca is a bridge language, a mixture of a number of tongues used to conduct business. A faculty of five teaches elementary English, German, and French to Italians, many of whom are uneducated and planning to seek employment abroad in service industries. Into this group comes young Steven Flowers. No longer the sunny, open-faced lad we first met in "Privates on Parade," Steven, thanks to World War II, the horrors of Stalin, and the threat of nuclear annihilation, has become a hard-edged, cynical, and somewhat selfish boy-man who refuses to grow up. Peggy Carmichael, a tightly wound 30-ish Englishwoman who seems destined for spinsterhood, sets her determinedly cheerful cap for him. But it's the blond young German lass, Heidi Schumann, who winds up in Steven's bed, despite her Hitler Youth residues. Completing the teaching staff are the middle-aged, no-nonsense, working-class lesbian Madge Fox, also English; the gentle and celibate Jestin Overton, who at 65 still manages to see the good in everything; and the elegant and cultured matron Irena Brentano, a Russian Jew who married an anti-Fascist Italian. Supervising them is the young and handsome Gennaro Manetti, married with children and always with a mistress on the side, usually one of the teachers.

Nichols reveals his characters as much through the lessons they teach as their interactions, with monologues spoken to solo students proving particularly effective. Gradually, we come to understand that the playwright is also presenting a portrait of Europe's postwar malaise and the high price paid for defeating the Axis powers, which includes the cultural and political ascendancy of America.

Under Michael Gieleta's intricately calibrated direction, the actors give performances notable for their nuance and texture. Chris New accents Steven's restlessness and thin skin and is disturbingly gleeful as Steven drills his students in smutty British music-hall songs they don't understand (something that harkens back to "Privates"). Natalie Walter is an enthusiastically hedonistic, morally vacuous Heidi, yet somehow she also finds the character's vulnerability. Anna Carteret is a poised and triste Irena; Ian Gelder makes us believe in Jestin's innocent soul despite our knowing that this courtly man may be a nonpracticing pedophile; Abigail McKern's Madge is sharp and tart; and Enzo Cilenti's Gennaro smartly mixes insecurity and practiced charm. Special mention should be made of Charlotte Randle, as Peggy, who takes a character that could border on cliché and makes her vivid, specific, and a bit scary.

James MacNamara's nondescript institutional-wall set is just right, allowing Emily Stuart's costumes to pop as they define both character and period. James Smith's subtle lighting guides us between classrooms and the common room.

At 83, Nichols could easily just sit back on his laurels, so it's a special pleasure to encounter this mature and thoughtful drama that asks the interesting question, as Peggy puts it, "When does 'innocent' become 'obtuse'?"