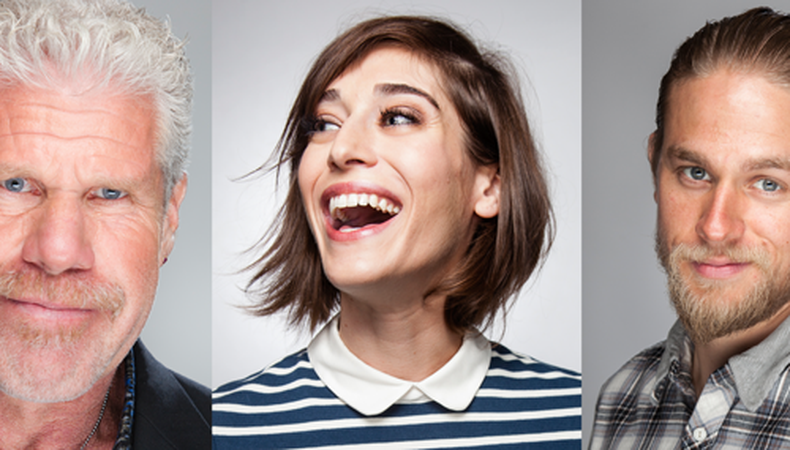 While Lizzy Caplan’s adeptness at comedy is fresh in audiences’ minds with “Bachelorette” still in theaters, Charlie Hunnam and Ron Perlman aren’t two names you immediately associate with comedy. But the stars of the FX drama “Sons of Anarchy” are lightening up considerably alongside Caplan with “3, 2, 1…Frankie Go Boom,” hitting theaters Oct. 12. In the film, written and directed by Jordan Roberts, Frankie (Hunnam) is a put-upon writer who has gone into hiding after he’s humiliated in a YouTube video shot by his brother Bruce (Chris O’Dowd).

When Bruce films video of Frankie in a compromising position with Lassie (Caplan), the daughter of a Hollywood hotshot (Chris Noth), hilarious chaos ensaues—including Perlman as a post-op transgendered woman who is, in Perlman’s words, “the ugliest broad on the face of the earth.”

How did you go about landing your roles?
Charlie Hunnam: I wasn’t really looking to do comedy, because I’m not really very funny. But Jordan approached me, and for some reason he came to the conclusion I was the guy he wanted and pursued me relentlessly. And it just seemed like there was no risk, really. We made this film for $400,000 in 19 days, and I thought, Why not? It’s either going to be a piece of shit and no one will see it, or it will be great and a fun experience.
Ron Perlman: Little did we know it was going to fall somewhere in the middle, which is our worst nightmare. It’s just good enough that we have to promote it!
Lizzy Caplan: I read the script and thought it was really funny. I think this was around the time I wasn’t super pumped about doing a tiny, tiny movie, but I heard Charlie was attached, and it was an interesting choice because they weren’t going for…
Hunnam: A funny guy?
Caplan: Well, I thought it was a great choice. And I thought it would be a challenge to do some of the weird shit Lassie has to do.
Perlman: I was brought in by Charlie, actually. We had just finished a season of “Sons,” and he said, “This is my summer vacation project, my arts and crafts thing, and the director would like me to pass it on to you.” I was supposed to look at the role Chris Noth ended up playing, but I then get to Phyllis. And there’s this gesture when he meets Frankie—I ask for my hand to be kissed. And I was just thinking of all those “Sons of Anarchy” fans. And I realized that even if I blow this performance, that shot alone will be worth the price of admission.
Caplan: I feel like we all got to play against type, and it was fun to take a swing at something with very low stakes.
Perlman: That’s why one does these little films; you get a chance to do things you wouldn’t normally get to do if the film was more mainstream.

So is Charlie really not funny?
Caplan: No. Not on purpose.
Hunnam: I’m not. Not in the least.
Perlman: I think he can be, but you can never predict it. And actually, comedy only works if you don’t play it for the laughs. You have to immerse yourself in the seriousness of it; therein lies the incongruity.

Ron, you’re not really known for comedy either.
Perlman: No. But you know what’s funny? The very first thing I ever did in showbiz was standup comedy. I had a partner, he was Schwartz and I was Perlman, so we were Stuart and Perry because when I was growing up it wasn’t hip to be Jewish.
Caplan: Yeah, who’s ever heard of a Jewish comedian?
Perlman: We did standup comedy at all these clubs in the Bronx and Manhattan. And we were horrible. And all the theater work I did coming up in New York was exclusively comedy. But when I moved out to Hollywood they looked at this face and just went, “Yeah, gangster.” It just didn’t read funny. So my doing comedy now is like returning to my first love.

Lizzy, you do both genres but you’re mainly associated with comedy. Have you had trouble landing dramatic roles?
Caplan: Yeah, I think everybody gets a little bit typecast, and I have to prove myself more when going out for a drama. But I love doing comedy, so I can’t complain.

Ron, how did you prepare to play Phyllis?
Perlman: All her scenes were shot in one day, though we added a scene later on. I showed up in the morning so they could decide on what color nail polish, how the wig would look, what part of me needed to be shaved. So it was hours of that, which you usually have a day designated for on a movie with a budget, and also 11 pages of dialogue. So I made sure I was prepared when I came in, which I don’t generally do. I tend to come in semi-prepared, and then as we rehearse I start to make decisions. But I came in with all my lines learned, and I changed my whole modality because I knew it would be real guerrilla filmmaking, and I didn’t want to be the one who fucked up this guy’s life savings. So they put the wig on and drew on eyebrows like Gloria Swanson in “Sunset Boulevard” and gave me a slinky negligee. And a star was born.

Who takes more time in the makeup chair, Phyllis or Hellboy?
Perlman: It was almost a tie.

These roles came as offers, but would you be willing to share with us your worst audition story?
Caplan: I met with the “Napoleon Dynamite” guys, and I had loved their movie and was really excited to meet them. The character was described as really weird, so I totally dressed up in this crazy outfit and did these weird things with my hair and teeth and makeup. And then I got into the waiting room and everybody else was dressed completely professionally.
Perlman: It’s not so much one bad audition that springs to mind as a series of them from 1973 to 1982.
Hunnam: I met George Lucas to play Anakin Skywalker years ago, and George is not the most gregarious people person—he’s very shy and measured. So I did my audition, and it went horribly—I was awful. And the casting director got pulled out of the room and George and I got left alone. So I said, “Weather’s been hot, huh?’ He goes, “Yeah. Summer in L.A.” There was a moment, and then he said, “Well, I’ve run out of things to say.” And we sat there in silence for about three and a half minutes until the casting director came back.