The London Merchant or, The History of George Barnwell 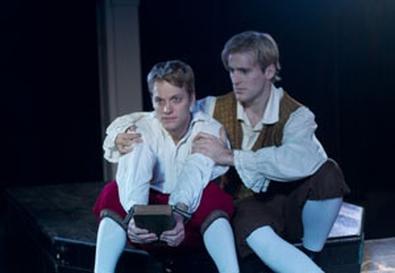 Photo Source: Michael Abrams
It has been left to the enterprising Storm Theatre, in collaboration with the Blackfriars Repertory Theatre, to at last introduce the playwright George Lillo and his 1731 drama "The London Merchant "to New York. The play has been called "the first bourgeois tragedy," for instead of presenting the usual upper strata of English society, it focused on the merchant class, with characters that were immediately recognizable to a middle-class theatergoing audience. For Lillo, with his accent on Christian morality, this emerging group of capitalists was just as worthy of a fall from grace as their supposed betters. The play gained immediate popularity and became one of the most frequently performed plays of the 18th century, with its newfound focal point having considerable influence on later British and Continental playwriting.

So why has it lain hidden all these years? The story is a straightforward one, being a moral treatise on the road to ruin. As such there is little surprise and not a great deal of dramatic tension. Millwood (Jessica Myhr), "a lady of pleasure," has vowed to have her revenge on men. "Women are your universal prey," she observes. She sets her sights on an upright, innocent apprentice, George Barnwell (Patrick Woodall), who lives in the London house of his merchant master, Thorowgood (Joe Danbusky). Also in this house is a second apprentice, Trueman (Harlan Work), who is George's stalwart friend, and Thorowgood's daughter, Maria (Megan Stern), who is in love with George. We witness the respected George drawn into the web of the lovely, unscrupulous Millwood, who is aided in her evil scheme by her two servants, Lucy (Michelle Kafel) and Blunt (Spencer Aste). Soon poor George is awash in "this world of woe."

There is pleasure here in the formality of Lillo's language as he creates a glowing scene of goodness that is surprisingly convincing. But, as ever, it is the serpent in the garden who has the best lines. Lillo's delineation of Millwood's character is the most compelling aspect of the play. He makes her both captivating and complex; at her most devious she dissembles with a cunning grace. Though it was clearly never Lillo's intention, she has the makings of a feminist heroine.

Under the astute direction of Peter Dobbins, the well-spoken production has a pleasing bare-boards simplicity that captures the period. Myhr creates a young, attractive Millwood who is deliciously cool in all circumstances, perhaps too cool in her final damnation of men. Innocence is difficult to convey, but Woodall gives George a shining goodness that speaks well for the actor's future. There's a capable supporting cast, especially Danbusky and Work, while Maria Kousoulos' costumes, Michael Abrams' lighting, and David Thomas' sound design greatly assist this cautionary tale. Any student of dramatic history should hurry to make the acquaintance of Millwood and George and finally give George Lillo a welcome to New York.