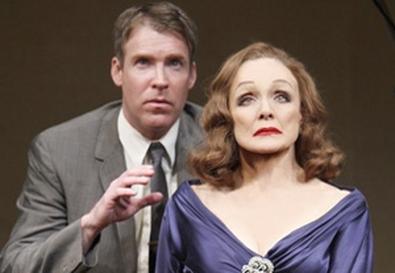 Photo Source: Carol Rosegg
Nobody likes a good Tallulah Bankhead story more than I—in fact, I'll launch into my deep-throated imitation and call you "Dahling" at the least provocation—but even I get a bit tired if it goes on for two hours. That's the trouble with "Looped," Matthew Lombardo's new play, now on Broadway after runs in Pasadena, Calif.; West Palm Beach, Fla.; and Washington, D.C. Lombardo has taken a Bankhead anecdote and thinly stretched it into a full-length play.

In 1965, the alcoholic star spent an entire day re-recording (or looping) a few lines of dialogue for what turned out to be her final film, a schlock horror flick called "Die, Die, My Darling." Lombardo has reduced the number of lines to one and thrown in a truckload of Bankhead zingers; a couple of excerpts from "A Streetcar Named Desire," in which she gave a famously bad performance; and a soapy subplot involving Danny, the frustrated film editor in charge of the session. The whole affair feels pasted together like a fan's scrapbook. Bits of biography are tossed around with the jokes, and a second-act confrontation with Danny pops out of nowhere. There is potential for a juicy showbiz stage memoir here. Bankhead was on her last legs at this point: dying of emphysema, practically unemployable due to her unreliability, and hopelessly addicted to booze, cigarettes, and cocaine. She had been a great stage comedian and respected dramatic actor, but she allowed her outrageous behavior—both offstage and on—to overwhelm her talent.

There are several memorable one-liners dealing with Bankhead's notorious affairs with both sexes ("[Joan] Crawford was a lousy lay. She kept getting out of bed to beat the children"), substance abuse, and foul language. But if wisecracks are the highlight, you might as well put on a one-woman musical—as Tovah Feldshuh and Helen Gallagher have done—instead of a play, which requires sound structure and character development.

Fortunately, Valerie Harper gives a tour de force performance as the battered but unbowed Bankhead. From the familiar whiskey-and-tobacco voice to the unsteady stagger, Harper captures the voracious and volatile diva. Her timing on the laugh lines is impeccable, and her follow-up reactions wring every last guffaw from them. But she's not just doing a funny impersonation. Though Lombardo's script gives the actor ridiculously obvious cues for serious passion—when Bankhead mentions she never had children or when she's asked to perform a monologue from "Streetcar"—Harper delivers the goods. She invests the heavier moments with the same honesty and concentration as the big-yuck payoffs.

As Danny, Brian Hutchison has been handed a thankless task. For much of the play, he's simply there to feed Harper straight lines, and then he's got to unload his deep, dark secret in a gushy speech accompanied by an ocean of tears. Hutchison finds a clever way out of the predicament by treating Danny's emotional distress as a physical ailment, but he's still the victim of a two-dimensional part. The reliable Michael Mulheren is confined to a sound booth as Steve, the engineer, but fulfills his functional role professionally.

Rob Ruggiero's direction moves the proceedings along at a steady clip, but he can't disguise the fact that "Looped" is pretty thin soup.