'For Love' Is Sexy, Salty, and Sharp 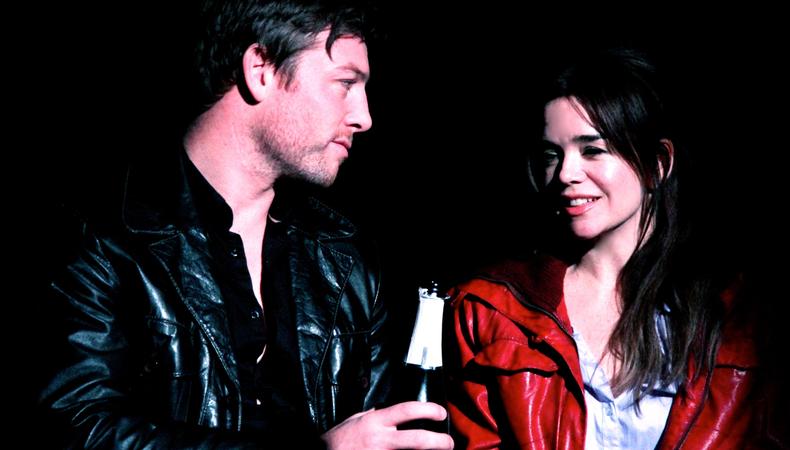 The lights dim in the tiny theater. They come up slightly to reveal a drunken couple graphically doing the nasty. Before they reach a climax, the man can be heard snoring loudly. The woman curses, finishes by herself, and then nods off as well. The male then staggers awake with his pants around his ankles, stumbles stage right, and appears to relieve himself into the wings. Despite this raw and raunchy opening, Laoisa Sexton’s “For Love,” now at the Irish Repertory Theater’s intimate studio space as part of a tour following a successful debut at the 1st Irish Theater Festival, is an affecting, funny, and moving look at the confused romantic lives of three Dublin women.

There’s Bee, played by Sexton herself, a lonely single bank teller in her late 30s faced with the prospect of soon becoming a grandmother. Her young son, the product of a teenage affair, is about to become a father. She’s contemplating embarking on a liaison with Aidan, an attractive married customer with a flashy BMW. Her best friend and co-worker, the hefty Val—the one from the crude opening scene—will only date good-looking blonds and is constantly disappointed. Tina, the narcissistic wife of their boss, is more interested in shopping than in her paunchy, balding husband.

Although her script does take the occasional detour into sitcom land, and all three ladies’ sexual dilemmas are tied up a little too neatly at the end of the play’s tight 80 minutes, Sexton captures the messy, complicated lives of working-class Irish people with attention to quirky detail. There are lots of offbeat stories crystallizing the women’s desperation. The most moving of these is Bee’s childhood reminiscence to Aidan of finding a dead eel by the seaside and dragging it on the beach as if it were a pet. Even Aidan, who treats Bee rather shabbily, emerges as a three-dimensional being yearning for more than a quick fling. Instead of stressing the sexual nature of their relationship, he wants to spend the day with her at the Dublin zoo and rhapsodizes on the beauty of the elephants.

Director Tim Ruddy utilizes the teensy theater to maximum effect, even employing the aisles as a dance floor in a nightclub scene. Kortney Barber’s realistic sound and Michael O’Connor’s economic lighting help set the multiple scenes. In addition to writing such a sexy, salty, sharp script, Sexton skillfully charts Bee’s difficult trip on the road to self-esteem. Jo Kinsella is a bawdily hilarious Val, Georgina McKevitt is a delightfully shrewish Tina, and John Duddy reveals both the sweet and selfish sides of Aidan, as well as colorfully creating all the remaining male characters.