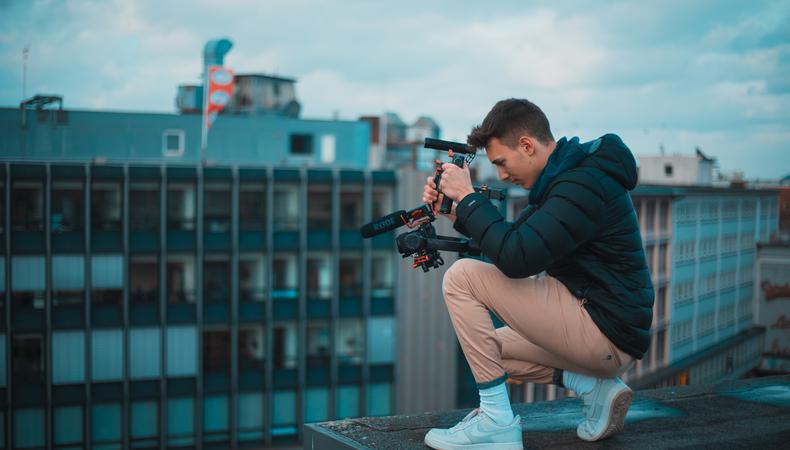 If you’re in need of a collaborative, talented crew, but not confident about what you can offer financially, posting a crew job online can feel uncomfortable. Below, I’ll walk you through how to create the best crew call for your low-budget project and where to post it so you attract the people you need.

The great news is that low-budget shoots are especially poised to offer collaborative environments that could lead to life-long industry relationships, which is why many creatives at the start of their careers jump at the opportunity to work on exciting—albeit low paying—projects. Whether you’re the director, producer, AD, or all of these positions in one looking for crew, it’s important to post jobs that accurately reflect your project’s goals and services so they attract the most motivated people to work on your set. Here’s how to do it.

Talk up your project.
Your goal is to create something extraordinary, so convey this passion by describing your project as colorfully as possible. Instead of a run-of-the-mill “looking for a Boom OP for a short,” try, “Searching for a collaborative Boom OP for an action-packed thriller set in the Wild West!” A catchy job description will draw far more talented, engaged creatives.

And don’t forget to brag about your existing crew. Has your director been recognized for previous work? Does your DP have an impressive IMDb page? If possible, include photos and mini-bios of your team so applicants know the awesome people they’re singing on to work with.

As producer and casting director for an upcoming feature film, I watched our director include captivating details in job postings that directly spoke to his personal commitment to the project. He also created a stunning website, strong social media presence, and links/bios of the core cast and crew so applicants could cross-check the validity of the post. The applications came pouring in within a few days of posting. Lead with confidence about the project and you’ll find yourself with an inbox full of applications.

Be clear about shoot dates and application expectations.
You don’t want to find the sound mixer of your dreams, only to discover she’s not available during your shoot dates. Explicitly state the exact dates you need crew for rehearsals and production (or block off a few weeks if you haven’t solidified those dates.) Also, ask applicants to include a demo reel, resume, and IMDb link. This will be especially helpful when searching for DPs, production designers, and hair/makeup artists, and it provides an extra layer of vetting so you don’t spend precious time going back and forth, asking for more work samples. Make the screening process easy for you and your team by being ultra-specific.

As a PA desperate for work right out of school, I remember how frustrating it was to read job postings that failed to provide any concrete logistical information. When I found a straightforward gig offering free meals, transportation, and a story I’d never seen done before, I jumped at the opportunity, even though it was unpaid; the promise of networking, honing my skills, and learning was enough. If the description had been unclear, I never would have considered the posting.

Be direct and honest about what you will be providing your crew.
The first time I directed a short film, it didn’t take long for me to learn that when searching for crew (and a cast), being transparent about what you can offer will draw in exactly the type of people you need. Before the cameras even started rolling, everyone was on the same page regarding pay, meals, and transportation. So be upfront. If you can’t offer payment, make that known right away. Emphasize that you’re an eager, creative, supportive filmmaker looking to build relationships and make something really special.

If possible, cover all transportation expenses for your crew (if you aren’t strictly looking for voluntary work), and provide at least one meal for every six hours your crew works. Even though you’re non-union and this isn’t legally required, it’s good practice to treat your crew with respect and operate like a professional production as best you can. One great experience on your set could lead to countless other opportunities for you. It all comes down to a positive attitude and honesty.

If you can offer payment, consider posting your rates for key positions. Here’s the reasoning: Since you’re not a big-budget production and can’t offer high rates, you’ll automatically weed out professionals expecting mega-bucks. With a transparent rate, you’ll probably eliminate any future haggling with applicants and hire people excited to prove themselves.

Ready to post?
A few job sites to consider are StaffMeUp, ProductionHUB, and Mandy. (Backstage will be included in this list soon as we start to roll out our crew hiring platform in the coming months.) You’ll find everyone from top-tier professionals to students fresh out of school ready to work. You can also check with your local film offices to see if they have a job board you can post your needs to. Major cities, unsurprisingly, have robust hiring resources—the New York City Mayor’s Office of Media and Entertainment comes to mind—but so do smaller cities and towns—shoutout to the Ohio Production Directory!

You can also utilize the power of social media sites like LinkedIn and Facebook. Not only can you put out a general call to your friends and followers (and ask them to share and tag any friends they have who might fit the bill), but both are rife with groups dedicated specifically to crew jobs. For example, the Production Freelancers’ group on Facebook has 93,000 active members, all of whom are looking for jobs. These types of groups are also incredibly useful if you’re not located in a major production hub as you’re likely to find hyper-local groups as well. (LinkedIn’s Michigan Film Production group is a great example of a localized resource for finding qualified, interested crew.)

If you’d prefer something a little more personal, ask around your network for referrals, reach out to crew members you’ve worked with in the past, talk to fellow creatives to see if they have personal recommendations. You’d be surprised how often people are willing to work for little or no money when it’s a personal favor. (Just make sure you remember to return the favor if and when you’re asked.)

Jenn Shadd
Jenn Shadd is a filmmaker and film scholar based in Los Angeles. She is a graduate of the UCLA School of Theater, Film and Television with a degree in Narrative Production, and a graduate of ASU’s Film and Media Studies Master's program. She works for the world's largest film and TV visualization studio, THE THIRD FLOOR, and is an associate faculty member in the ASU Department of English. Jenn hopes to create a cinematic body of work that reflects her passion for the empowerment of young girls and women.
END_OF_DOCUMENT_TOKEN_TO_BE_REPLACED