'Lucy Loves Me' Is Undone by Its Eclecticism 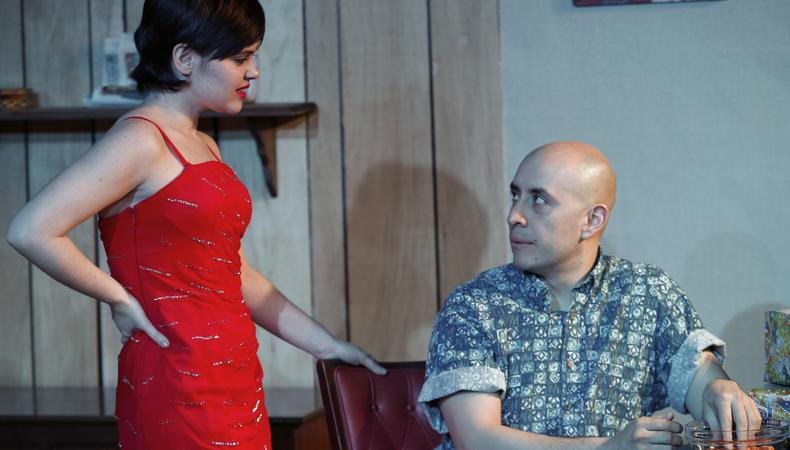 How many plays is “Lucy Loves Me”? A magical-realism reverie, with each of its three protagonists lapsing in and out of reality and introspective monologue? A nostalgic rom-com, with Milton raising the antenna on his cordless phone (it’s 1987) and trying to ring up Lucy but instead reaching her flirtatious mother, Cookie? A kitchen-sink coming-of-age drama about how not to raise children and how not to woo an insecure maiden? The answer is all of the above and perhaps a couple more; unfortunately, author Migdalia Cruz can’t synthesize her disparate genres. Individual elements of the play at Intar Theatre are of momentary interest, but as it leaps from one storytelling form to the next, plot and character points are left flapping in the breeze.

In his convincingly shabby studio apartment (set design by Raul Abrego), Milton fantasizes about, well, I’m not sure what, but it’s a long opening speech that lurches through blood, purification, rape, roaches, and lo mein. A nice guy with possible dark mental recesses—he may have done something terrible to his ex-girlfriend, but like many things here it’s hinted at and dropped—Milton is articulate in soliloquy but a stuttering calamity in face-to-face interaction with a girl. That would be Lucy, a pizza deliverer, played by Bertha Leal with an appealing warmth and directness. Practical and carrying few illusions, she lives with her disaster of a mom, a self-centered nitwit who dreams of celebrity and doesn’t love her daughter.

These three, as you may have gathered, live very small lives, and just as Cruz is about to get us to care about them, she stumbles down another path and breaks whatever momentum she has established. Having invited himself to Lucy and Cookie’s apartment, Milton creepily romances them both, then squires them off to Connecticut to enter the Miss Oyster Festival pageant. Lucy, who has seemed pretty levelheaded up to now, is devastated by not winning and sobs all the way back to the Bronx. Mom and daughter argue some more, slaps and punches are thrown (in the air, in David Anzuelo’s clumsy fight choreography), and Milton and Lucy separately exit, to what futures I can’t possibly imagine. Curtain.

If Cruz has cogent statements to make about dysfunctional families, trampled-upon lives, or escape through fantasy, Lou Moreno’s direction doesn’t bring them out. We’re never sure whether or not to like Milton, played sympathetically but somewhat tentatively by Gerardo Rodriguez, and while there’s little to Cookie but vanity, pettiness, and crushed hopes, Annie Henk doesn’t do much with what she’s handed. All three actors are undone by Cruz’s eclecticism. Given that the well-made play is an increasingly endangered species, I’m as eager as anyone to see writers step out of bounds to foster new storytelling tropes. But the results have to be better made than “Lucy Loves Me.”