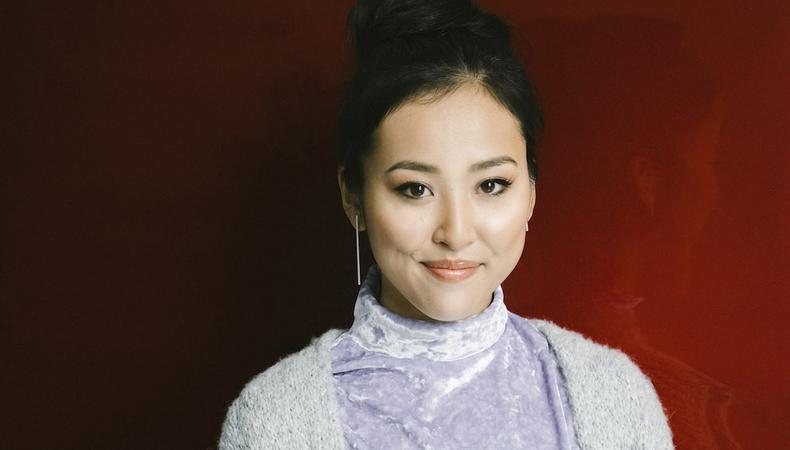 With her starring role as Nico Minoru on “Marvel’s Runaways,” Lyrica Okano knows she has something special on her hands. Now two seasons in and streaming exclusively on Hulu, the teen-oriented comic book series from creators Stephanie Savage and Josh Schwartz (“The O.C.”) is as much an action-packed coming-of-age story as it is a showcase for diverse narratives. (Her Nico, for instance, has a budding romance with Virginia Gardner’s Karolina Dean, fittingly shipped “Deanoru.”) Ahead of the Season 2 premiere on Dec. 21, Okano came by Backstage HQ to discuss the series’ impact on her life and the lasting audition advice she learned while studying in New York City.

Season 2 is bigger and better.
“You see us all on our own, no home, and we’re just a bunch of teenagers trying to figure out how to keep it together. We’re not quite great at that yet. It’s a struggle. This season is just a much bigger season in general. It’s a bigger show with much more action. You get to see us train and you get to see us learn how to use our powers together. That’s really exciting.”

She connected with Nico from the start.
“First of all, she’s a Japanese-American Marvel superhero, and that’s just rare to come by. I was just so excited by the opportunity to even audition for that kind of role. And I have a lot that I relate to [with] Nico. As a teenager, I wasn’t very open about my feelings and I was really confused all the time with how to express myself, and I feel like Nico is the same way. Nico is a huge feeler, but she’s not really great about letting that out.”

Be ready to play.
“A good scene partner for me is just someone who’s really good at listening and who’s willing to play and be present. I’ve been really lucky with my cast mates.”

Acting is all about “fleshing it out.”
“[Auditioning is] different for every project with me, but I think most of the time, I read the sides, and if I get a full script, I read the full script, and I do as much as I can to imagine my life as a character. What’s she gone through and what’s made her get to the place where she’s at? I ask myself a lot of questions. I’ve also been working with a great acting coach named Anthony Abeson, and he’s taught me a lot about ‘F.I.O.-ing,’ which is ‘fleshing it out.’ It’s pretty much, you have a scene, you flesh out all the circumstances, and then you go back and you kind of nitpick little details that your character might bring up or [that] the other character in the scene might bring up, and you act that out either by yourself or with a friend. It’s like playing pretend, but just for the sake of having something to remember when you’re recalling that during the scene that you’re auditioning with.”

Nico lets Okano put her black belt to use!
“My character, in particular—we have a few fight scenes come in, so that took a bit of training. And, luckily, my parents on the show, you see the Minorus fighting against each other, and…James Yaegashi, who plays my father on the show, and Brittany Ishibashi, who plays my mom, we all have black belts in martial arts. During Season 2, I was just like, ‘Well, I hope one day we get to use our skills and get to showcase that!’ And, finally, we got to do a lot of that…. I started karate when I was around four or five. My parents just wanted me to learn discipline and respecting my elders and focus and all of that, so that was kind of ingrained in me as a kid with martial arts.”

Diversity in Marvel? “It’s about damn time.”
“Karolina is the first lesbian Marvel character to ever be on a television show, and Nico is also one of the first bisexual characters to be on a Marvel television show. To see those characters that are so different from each other work out like that, I think that’s something that’s just so magical to see. You don’t ever see that in Marvel films or TV shows, so it was a huge step in the right direction for us to have that. I feel truly lucky to be on a show like ‘Marvel’s Runaways’ because it touches upon a lot of important subjects and issues that we’re facing today in the U.S., and it’s just much-needed. It sucks that this is all new, [seeing] such a diverse cast on a big show, but I feel truly honored to be a part of that…. It’s about damn time.”

Benjamin Lindsay
Benjamin Lindsay is managing editor at Backstage, where if you’re reading it in our magazine, he’s written or edited it first. He’s also producer and host of a number of our digital interview series, including our inaugural on-camera segment, Backstage Live.
END_OF_DOCUMENT_TOKEN_TO_BE_REPLACED