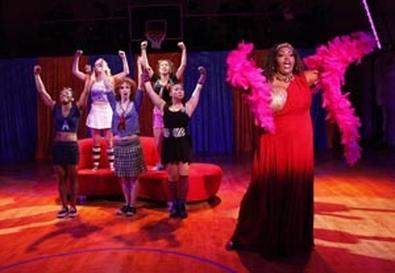 With "Lysistrata Jones," Douglas Carter Beane returns to the same wacky mix of Greek legends and pop culture he employed so successfully in "Xanadu." That campy Broadway musical hit had a grade-Z 1980s cult film for its basis. This venture, featuring a book by the witty Beane and a rollicking rock score by Lewis Flinn, has a slightly more upscale pedigree. It's an updating of the classic comedy by Aristophanes in which the titular heroine launches a sexual strike against the men of Athens to get them to end a devastating war. In this version, Lysistrata is a passionate cheerleader who persuades her fellow pompom girls to withhold their favors from the losing Athens University basketball team until the apathetic squad wins a game.

It sounds like a simplistic concept barely able to sustain a 10-minute comedy sketch, but Beane and Flinn inject it with such imagination and innovation that the show goes beyond the initial gimmick to address issues of conviction, intimacy, and cultural stereotyping. At first, this Lysistrata may seem like a bubble-headed Barbie doll, with her shallow goal of victory in the sports arena rather than achieving peace for mankind. But she wants the boys to care about their commitment to the team and their school instead of focusing on the after-game bacchanal. Her "sex jihad," as one of Flinn's jazzy lyrics puts it, leads both genders to question their relationships and their conceptions of themselves. The jock is really a poet, the nerdy blogger turns out to be a passionate firebrand, and two of the male basketball players accept their attraction for each other, as does the rest of the gang.

As with its recent offerings of "The Boys in the Band" and "Hello, Again," Transport Group delivers a fascinating site-specific production, with the action taking place on an actual basketball court at the gym of the Judson Memorial Church, which set designer Allen Moyer cleverly transforms into a variety of locales. Director-choreographer Dan Knechtges creates original staging and steps to convey the conflicts. His basketball moves are particularly enjoyable.

Each of the characters starts out as a broad stereotype—just as Aristophanes' figures are—but Beane turns the cultural expectations inside out, creating complex people within a comic context. The energetic company is up to the challenge, with Patti Murin leading the way as a lyrical Lysistrata, investing this somewhat daffy dreamer with pep and passion. Likewise, Josh Segarra goes beyond his pretty-boy good looks to find the sensitive poet in Mick, her athletic beau. Lindsay Nicole Chambers, as the library assistant Robin, and Jason Tam, as the socially inept political activist Xander, give their bookish characters unexpected heat. LaQuet Sharnell and Alex Wyse have a great deal of fun as a biracial couple seeking common ground in a funky number called "Don't Judge a Book." Liz Mikel is sassy and sizzling as Heterai, the goddess figure who serves as narrator.

For the record, the last musical version of "Lysistrata" I can recall playing New York was a 1961 flop called "The Happiest Girl in the World." Here's hoping "Lysistrata Jones" has a longer life beyond its current limited run than that sorry show.