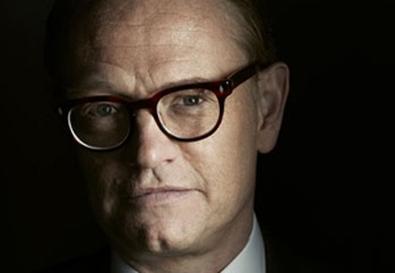 Photo Source: Frank Ockenfels/AMC
Spoiler Alert for "Mad Men" and "Fringe" fans: If you aren't current on both shows, stop reading right now and catch up with the episodes. As the rest of you already know, British actor Jared Harris has had a rough year on TV. After returning to "Fringe" as criminal mastermind David Robert Jones, last seen bandaged and decomposing due to the effects of teleportation, he was killed off in the season finale. And then last Sunday, his "Mad Men" character, Lane Pryce, shocked viewers by committing suicide. Back Stage spoke to Harris from his hotel in London, where he's currently shooting the supernatural thriller "The Quiet Ones." No word on his character's fate in that project.

When you returned to "Fringe," did you know your character's fate?
Harris: Well, I was a bad guy so I didn't have high expectations. And on that show, being dead doesn't mean anything, does it?

But your "Mad Men" death was unexpected.
Harris: Yep, it was.

How did Matt Weiner break the news to you?
Harris: We had just done a read-through for Episode 10. He has a chat with everybody after the read-through, and he kept me til last. He said, "Let's go up to the office." When we got to the office he said, "I've got something that I need to talk to you about." I said, "Uh-oh, that doesn't sound good." He felt terrible. He knew it was a good thing to do for the show and I was sad to be leaving, but I understood his reasons. He broke out some crazy bottle of brandy and we got sloshed.

Was that difficult?
Harris: It was hard in the beginning because I had a bit of a heavy heart about it, and I couldn't explain why. And we had to do all the publicity as well. The kickoff for the season was in March and there were lots of questions like, "Where do you see your character going?" Stuff like that. (Laughs) But everyone on the show was keeping the secret, so I wasn't alone.

You came to American TV later in your career.
Harris: Yeah, I did. I lived in New York and was doing independent movies and theater and wasn't interested in signing up for a long contact and limiting my options. I wanted to do as many different things until the point came where I had to do that. Now it's attractive, signing those kinds of contracts, but then I didn't want to.

So would you be open to doing another series?
Harris: Absolutely. But "Mad Men" is a tough act to follow.

You've been on two shows with very passionate fan bases. Has it changed your life in terms of being recognized more in public?
Harris: Well, they're very distinct characters so because I don't go out wearing big glasses or with acid burn makeup on my face, I can generally fly under the radar. I have noticed sometimes, like at airport security, I get those looks. I've also played a lot of villains so I know people are checking me out trying to figure out where they know me from. I feel like they're trying to decide if they recognize me from TV or a wanted poster they recently saw.