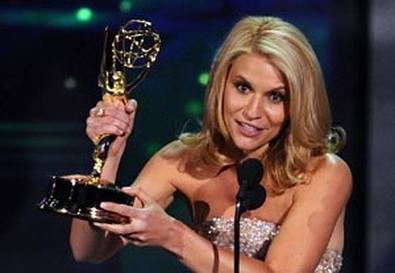 When "Family" co-creator Steve Levitan referred to the lack of recognition for writers as he accepted on behalf of the cast and crew, he joked, "That's Hollywood!"

The first Emmy of the night went to "Family's" Eric Stonestreet, who took home his first statuette for supporting actor. The ABC comedy continued its streak, winning for writing.

Jane Lynch, the favorite to win in her category, was named outstanding supporting actress in a comedy series for her work as Sue Sylvester on "Glee." To go along with her win, show co-creator Ryan Murphy took home the directing in a comedy series award.

After being nominated for a second year in a row, Jim Parsons took home his first Emmy for playing asexual nerd Sheldon Cooper on CBS ratings juggernaut "The Big Bang Theory." Flustered, Parsons thanked his costars and co-creators Bill Prady and Chuck Lorre during his acceptance speech.
Edie Falco won for her turn on Showtime's "Nurse Jackie." This is her fourth Emmy win. "I'm not funny," she confessed when she went onstage.

The surprises continued with "Top Chef" overtaking heavy favorite (and seven-time winner) "The Amazing Race" in the reality competition category.

"Mad Men" won its first Emmy of the night for writing in a drama series. Taking home the Emmy for supporting actor in a drama series was "Breaking Bad's" Aaron Paul. In his speech, the actor was stunned. "I'm up here for one reason and that's Vince Gilligan," he declared, referring to the show's creator.

Not to go unnoticed, Archie Panjabi of "The Good Wife" won her first Emmy over fellow costar Christine Baranski for her dramatic turn on the CBS drama.

Bryan Cranston continued his winning streak, taking home his third consecutive statuette for his work on "Breaking Bad." When Cranston won, Tom Hanks gave him a standing ovation. Presented by Emmy winners John Lithgow and Ann-Margret, "Dexter" helmer Steve Shill won for "The Getaway." With more categories to go, this means Showtime has won more Emmys this year alone than in previous tries.

Fallon then came out dressed as Elton John playing a pink piano, singing acapella and strumming a guitar a la Green Day paying tribute to three television shows that ended this year: "24," "Law & Order" and "Lost."

The upsets continued as the night went on with "The Closer's" Kyra Sedgwick taking home the Emmy for lead actress in a drama series. "The Good Wife's" leading lady Julianna Margulies, who won the SAG and Golden Globe awards this year, was heavily favored.

"The Daily Show With Jon Stewart" took home the award for variety, comedy and musical series, putting a slight damper on a night full of pleasant surprises for Conan O'Brien fans who wanted the new TBS late-night host triumphing.

Margulies, fresh off her defeat, presented "her dear friend" and "ER" costar George Clooney with the Bob Hope Humanitarian Award. Clooney received a standing ovation, to which he joked, "Don't do that because maybe then I'm sick and you all know it."

In the miniseries and made-for-TV categories, HBO continued its dominance with multiple awards for "Temple Grandin," including best made-for-TV movie. Claire Danes and director Mick Jackson, along with supporting players Julia Ormond and David Strathairn were also winners. The net's "You Don't Know Jack" scored two Emmys: lead actor for Al Pacino and for writing.

"The Pacific's" win for miniseries added to HBO's already impressive haul. Tom Hanks thanked the cast, none of whom were recognized with nominations, for their gripping portrayals in the 10-parter.

Musician Jewel performed a special song "Shape of You" written for a friend who passed away during the in memoriam tribute.

As the show closed, Fallon poured open a champagne bottle, declaring to the audience, "Party at Betty White's house!"

Check out the list of winners on the next page.


Here is the complete list of Sunday night's winners at the 62nd Primetime Emmy Awards (double asterisk next to winners):