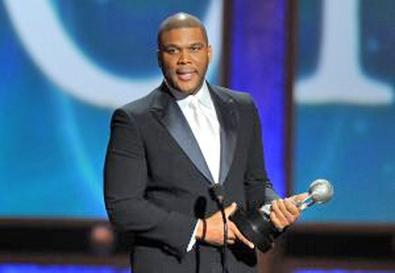 When Tyler Perry's "Why Did I Get Married Too?" opens in movie theaters April 2, it will be a hit. Since his first film, "Diary of a Mad Black Woman," was released in 2005, the director-actor-producer has cranked out the kind of small-ball successes that, according to conventional wisdom, 3-D-fascinated, tentpole-obsessed studio executives no longer attempt to cultivate. But Perry, who built a devoted audience of African-American churchgoers as a playwright and performer on the unfortunately named chitlin circuit, has turned a string of modestly priced film successes into an empire, with his reach now extending into television, books, DVDs, and Web programming. Should anyone question his bona fides as an industry force, they need only look at the theatrical poster for last year's best-picture Oscar nominee "Precious." There, above director Lee Daniels' name, is real proof of power: "Oprah Winfrey and Tyler Perry present…."

Critical praise, however, has not so much eluded Perry as run screaming from him. In a 2007 review of Perry's TBS sitcom "House of Payne," The New York Times' Ginia Belafante wrote that Perry's failings as a storyteller "suggest a shaky command of his larger purpose." She then dismissed his decision to turn one of his characters into a crack addict, writing, "Imagine if, say, on a sitcom like 'According to Jim,' the patriarch started molesting the neighbor's children—ha! ha!—and you begin to get the idea." Such is the tone of most critical reaction to Perry's work. Not that it likely matters much to a man who owns his own studio facility.

But while Perry has been engaged in empire building, black actors have seen declines in opportunity. In December 2008, the National Association for the Advancement of Colored People released a study showing that from the 2003-04 season to the 2006-07 season, the number of black actors appearing on prime-time scripted television declined at three of the four major networks. The study cited the cancellation of such majority-black-cast programs as ABC's "My Wife and Kids" and Fox's "The Bernie Mac Show" as factors contributing to a less diverse TV landscape. (Currently only one scripted network prime-time show—Fox's "Brothers"—has a largely African-American cast.) Then last October, in an analysis of casting data, the Screen Actors Guild reported that only 13.3 percent of all film and television roles in 2008 were filled by African-American actors—down from 14.8 percent the previous year.

"The opportunities for black actors are much fewer," said Mark Anthony Neal, a professor of African-American studies at Duke University. "In that regard, Tyler Perry's been kind of like a godsend."

Neal concedes that Perry is not "a great director by any stretch of the imagination" but points to his ability to attract top-flight actors such as Angela Bassett, Taraji P. Henson, and Alfre Woodard to his projects as evidence of Perry's unique clout as a filmmaker and producer.

"Give Tyler Perry some credit," Neal said. "He recognized very early that he had a brand and created a context in which he would have control of that brand. I think obviously there will be copycats, and the beauty of a Tyler Perry and of the model he created is that somebody is going to come along and is going to take that model and is going to be a better filmmaker."

Todd Boyd, a professor at the USC School of Cinematic Arts, would rather not give Perry credit. Boyd called Perry's films "probably some of the most unartistic, ignorant, degrading, stereotypical representations that one could ever possibly imagine," adding that Perry's ability to recruit talented and well-known black actors to his films is "a testament to how weak the game is" when it comes to black filmmaking and the opportunities presented to black actors. He cited the '90s, when filmmakers like John Singleton, Mario Van Peebles, and Spike Lee—the last of whom Boyd credits with helping to launch actors such as Halle Berry, Samuel L. Jackson, and Queen Latifah—found success, as a more optimistic time for African Americans in Hollywood than today. But in the years since then, Boyd said, a polarizing effect has taken place, with actors such as Berry and Denzel Washington achieving superstardom without their success trickling down to others.

"Increasingly with every year, you had this visibility at a mainstream level, but there were fewer and fewer films you could label as African-American films being released," Boyd said. "The kind of films that people were making in the '90s were seemingly gone, and this is the void that Tyler Perry stepped into."

From a business perspective, Perry has done a lot to fill that void. His seven films so far have grossed a domestic total of $390.4 million—an impressive number when you consider that Perry makes movies on budgets that represent only a fraction of what most Hollywood filmmakers with his level of success spend. His two TBS programs are flourishing, with "House of Payne" having garnered higher ratings than any other cable sitcom ever. And he brought his theater audience—a group largely used to ignoring movies—with him when he made the leap to film. If not for Perry, a Hollywood climate that has cooled on African-American artists in recent years might be downright frigid.

But all his accomplishments may never be enough to sway Perry's critics. Boyd, for instance, said that Perry's success has been great for Perry, but "damaging" to everyone else.

"I think it's terrible in an environment like Hollywood, where there are so few opportunities for African Americans to have a presence, if this is the dominant presence and seemingly only one," Boyd said. "I think it means that Hollywood comes to compare everything to Tyler Perry and he becomes the standard, which is troubling."