‘Magic/Bird’ and ‘Seminar’ Close; Cannavale and ‘Rebecca’ Come Back 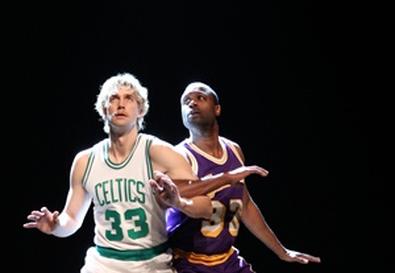 Photo Source: Joan Marcus
The Tony Award nominations were announced on Tuesday, and it wasn't long before the first victims of Tony's cold shoulder announced shutterings. Two shows which received no nominations—"Seminar" and "Magic/Bird"—both posted closing notices. “Magic/Bird” will close on May 12, and “Seminar” will play its final performance on May 6. That leaves the John Golden and Longacre theaters available for the Fall. Possible tenants may include "The Heiress," "Honeymoon in Vegas," and "Matilda the Musical."

Bobby Cannavale, who last appeared on Broadway in "The Motherf**ker with the Hat," has signed on to star in a revival of Clifford Odets' "The Big Knife" with Roundabout Theatre Company. The 1949 play focuses on Hollywood star Charlie Castle who struggles to save his career from a dark secret. John Garfield headlined the original Broadway production, which was directed by Lee Strasberg. Jack Palance starred in the 1955 movie version, but Rod Steiger stole the film as the villainous studio head. Doug Hughes directs this revival set to begin previews at the American Airlines Theatre on March 22, 2013 in advance of an opening in April.

The musical version of "Rebecca" had to postpone its Broadway opening this season when a crucial backer withdrew. The limited run of "A Streetcar Named Desire" slipped into the Broadhurst, its announced home. Now it's been confirmed the suspense-themed thriller will play the Broadhurst this Fall, beginning previews October 30 for a November 18 opening. However its previous leading lady Sierra Boggess has withdrawn to join "Prince of Broadway," the revue of producer-director Harold Prince career.

However, Boggess might not make it to Broadway next season. In a six-degrees-of-separation stroke of bad luck, "Prince of Broadway" is suffering from the same ailment as "Rebecca" did. According to Michael Riedel in the NY Post, a major investor in the revue has pulled out. The show, directed by Susan Storman, did not have a theater confirmed and still plans to open in November.

"Prince" director Susan Stroman is also working on a developmental lab production of a new show called "Little Dancer," by the team of Lynn Ahrens and Stephen Flaherty ("Ragtime," "Once on This Island"). Casting Director Tara Rubin will be holding an Equity principal call for the lab which runs June 13-29 on May 15. See the casting notice at Backstage.com.

Looking ahead, "Avengers" stars Scarlett Johansson and Jeremy Renner are reportedly in talks to star in a Broadway revival of Tennessee Williams' "Cat on a Hot Tin Roof." In keeping with superhero movie casting, Brian Cox of "X2," the X-Men sequel, or Mickey Rourke of "Iron Man 2" would be perfect for Big Daddy.

For a list of all the shows currently on Broadway and casting information, check out Back Stage’s production listings.