How Joss Whedon's 'Much Ado About Nothing' Came to Be 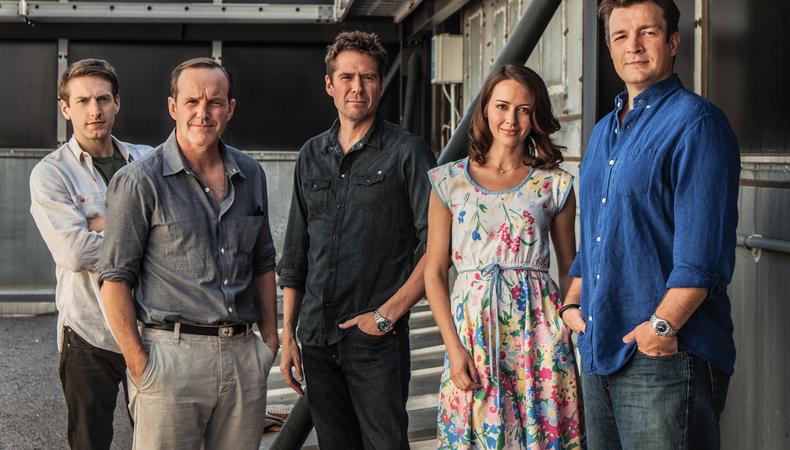 Joss Whedon knows how to build an ensemble. Whether it’s a blockbuster franchise like “The Avengers” or any of his beloved television series, the writer-director specializes in matching his stable of great actors to the right material. So when he decided to tackle Shakespeare’s classic tale of sparring lovers, “Much Ado About Nothing,” he gave it a distinctly Whedonesque spin. Whedon shot the film in black and white in only 12 days at his Santa Monica home, using an ensemble of actors with whom he was already familiar. Many had performed the Bard’s words for Whedon as part of his legendary Shakespeare brunches, where he gathers actors at his home to read plays. His “Ado” film cast includes “Angel” stars Amy Acker and Alexis Denisof, who play soul mates Beatrice and Benedick; “Dollhouse” genius Fran Kranz as young lover Claudio; “Avengers” agent Clark Gregg as Leonato; and “Firefly” captain Nathan Fillion as the comically inept constable Dogberry.

How did Joss first approach you about doing the movie?
Clark Gregg: I was at a barbecue at his house like a week after “The Avengers” had wrapped. I’d seen what he’d just been through for five months, and I was curious where he was going to go be comatose for a week before he had to start editing. He said, “Actually, I’m going to do a film of ‘Much Ado About Nothing.’ ” I felt like guys in white suits were going to come up behind him. Then I realized he was serious, and he asked me if I would be in it. I had just that day said yes to go do a play in New York. I was kind of heartbroken. Then they pushed the play two weeks, and you wouldn’t think that would be enough time to fit a feature film. But I was afraid if I called he’d say, “Ohhhh.” Then he called a couple days later to say someone couldn’t do it, and was I in? We’d start tomorrow.

Amy Acker: Mine is boring: I just got a call.

Alexis Denisof: I’ll tell you mine. The last time I’d seen Joss was halfway through the shoot of Clark’s little movie, “The Avengers,” in which I had a small role. He called, having just wrapped, and he said, “I just got back, and I need to talk to you. Are you around?” I put the phone down and said to my wife, “Bad news, honey, I’m pretty sure I’ve been cut from ‘The Avengers.’ ” She said, “Why don’t you relax first and then see what he has to say?” So he arrived and pulled the script out of his pocket and said, “I’m thinking of shooting this at my house in two or three weeks. I’ve got 12 days. What do you think?” I had already said yes before he finished the sentence. It sort of felt like how he’d say, “Let’s do a reading.”

Acker: Nobody really knew it was going to be a real movie.

Nathan Fillion: I thought he was going to film us sitting around reading. I thought, This will be low pressure!

Fran Kranz: I really believed that too. Then I saw a group email where he was stressing, “Know your lines,” and I saw all these names involved, and I thought, This is incredible. And the first A.D. emailed me asking for my social security, and I wrote back, “Are we getting paid for this?”

Denisof: I spent more on babysitters than whatever that check was. But I’d do it all again.

Gregg: You guys got paid?

When did you realize you were making a real movie?
Kranz: When Nathan tried to get out of it.

Fillion: I was working at the time, and the schedule’s pretty horrendous, and I was going to work weekends to do the movie, and I was nervous. I tried to pull out. He said no. And thank God he said no.

Denisof: He could see Nathan would knock this out of the park and wouldn’t let him chicken out.

Fillion: “Chicken” is a strong word. It’s accurate, but strong.

This was a 12-day shoot, and I’m guessing the budget was less than the catering bill on “The Avengers.” Did that make it tough or fun?
Denisof: The kind of hard that is fun because everybody was doing it because they wanted to.

Fillion: I hadn’t been challenged like that in a long time. I found it very challenging. And fruitful.

Kranz: I remember being impressed there was always something going on. I was at the house a lot, but I wasn’t always working, and I would hear them going in some other room. It was a well-oiled machine.

Acker: It felt very ensemble because you would have them shooting in that corner, and someone’s over here, and there’s a person getting into hair and makeup, and you’re wearing your own clothes. Everybody was doing every job.

Gregg: So often on movies, you’re sitting around. It’s a strange thing to bitch about, but it’s really hard to get your energy back in the right place, then let it go. There was something really liberating about how often you were actually working.

Denisof: Obviously, who wouldn’t love a little more time to have a few extra takes, but by putting all that aside, the overall sense I have is that 12 days was perfect. You had just enough time to figure out what you were going to do and do it and then move on. You couldn’t go and pick something apart. You just started to feel freer and freer over the course of this thing.

Kranz: It taught you to let some of those things go, and by doing so you were less and less inhibited.

Denisof: You can get perfectionist, and this certainly was a cure for perfectionism. You need each other on this. You can’t afford to not help each other.

Gregg: Everybody had your back. And I think you see that; I don’t think you can pull off doing something like this in such a short time unless you have that kind of comfort level that makes people take bigger risks.

Were there challenges in shooting at Joss’ house? I understand there were some noisy dogs in the neighborhood?
Acker: I think that bothered Joss more than any of us.

Gregg: They started demolishing the house next door the day after we started shooting. Also, the neighbors were not happy with people parking on the street, so there was a whole thing where you’d pull up and some intern would grab your car and drive off with it.

Kranz: We had some police show up at some point.

Denisof: We did. We almost got shut down.

Fillion: I don’t think the neighbors loved us. [Yelling] “I can hear your poetry!”

What is it about Joss that is so special that people will move mountains for him?
Gregg: There’s a lot of writer-directors who, no matter how much they love actors, feel like they’re a different species. There’s a kind of affinity and belief in people. He does a thing my favorite directors do: He doesn’t cast people based necessarily on who they are but how that character will form a dynamic with who they are. So you end up getting cast in roles you might not normally get cast in because there’s this alchemy that happens when you’re pushed out of your normal comfort zone.

Acker: He also makes everybody look good. I think people like to feel proud of their stuff, and he does a great job of that. That’s been the gift of having gotten to do so many things. For me, starting in a potato sack on “Angel” and ending up as a blue demon goddess is amazing.

Fillion: I would move mountains for Joss because I’m standing on a mountain that Joss built. I’ve had some good guidance in my life, I’ve had some excellent opportunities, but I cannot deny what Joss has done for me single-handedly.

Kranz: I always feel like when I meet someone who’s worked with Joss or Joss has an interest in, I always assume I’m going to like them as well. There’s an immediate sense of community when you feel a part of something larger.