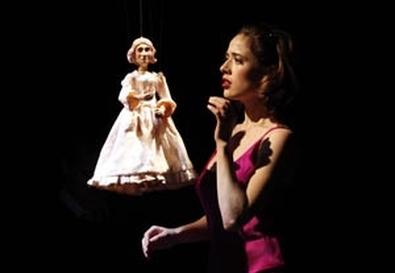 Photo Source: Carol Rosegg
It's hard to tell immediately what it is about "Manipulation" that doesn't quite work. Bill Stabile has designed an appropriately gloomy set with nice detailing, and Kirk Bookman's moody lighting bears a foreboding quality, which is fitting for the dark drama. However, it slowly becomes apparent that Will Pomerantz's overly meticulous direction stunts Victoria E. Calderon's trite script, and the production ultimately comes across as noticeably reworked.

A group of puppeteers parade on stage with marionettes representing the play's main characters, and as the heroine, Cristina (Marina Squerciati), sleeps, the puppets act out her nightmare. This puppet motif continues throughout the production, and it is one facet of Pomerantz's attempts to ignite this muddled mess. While the script only calls for puppets in certain instances, there are points when Pomerantz goes so far as to have the actors mime a marionette's movements as they perform a scene.

During the play's pivotal moments—a mental breakdown, a rape, a murder—the director practically pauses the action, letting it unfold in slow motion. These moments feel unnecessary, especially as these miniature climaxes don't really come from anywhere. The shock value is merely an attempt to compensate for the dull plot.

Cristina is in an unfulfilling marriage with Mauricio (Robert Bogue), who unabashedly cheats on her, while her fiery mother, Beatriz (Saundra Santiago), condones Mauricio's dealings and encourages her daughter to do the same. Cristina finds refuge, at least sexually, in Luis (Rafi Silver), but she ultimately seeks professional help from a psychiatrist (Jeremy Stiles Holm), though he ends up turning on her as well. She writes letters to a romantic revolutionary (Brendan McMahon), who is part of the Latin American town's surrounding violence. Cristina casually refers to the brutal dealings once or twice, but it suddenly figures largely in the story at the very end.

As the doe-eyed Cristina, Squerciati wanders unsurely on stage. Her character is under pressure from her mother and her cheating husband, but Squerciati never makes Cristina's angst and struggle palpable. Even when Christina reaches her ultimate breaking point, it's difficult to see where her emotion originates. Her character is not very interesting, and it's difficult to care about a heroine who gives the audience no reason to feel anything for her.

Unlike its many marionettes, "Manipulation" lacks the necessary strings to hold it together, and Calderon's contrived drama fails to shock and move in the way it intends.