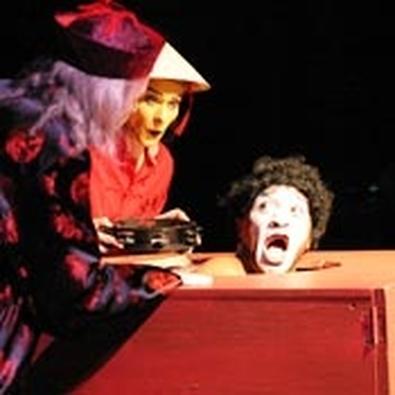 Hook director Ron Sossi up to California's energy grid. He has squeezed the corn out of Bertolt Brecht's otherwise devastating script and turned it into jolts of thoughts and feelings. In a consummately imagined rendering, performed by a cast that nearly sweats blood for us, this tale of one unpretentious man who becomes the "perfect" soldier is a provoking tale of malleability and individualism and the power of suggestion that comes from tainted "leadership."

Galy Gay, the humble porter on a waterfront locale in Imperial India, cannot say no and thus is persuaded to take the identity of a soldier. Of course adding a layer of metaphor: The very small, very female Beth Hogan plays him with the suggestion of a mannish physicality and a lowering of her voice to a bit of a growl. But more crucial to our appreciation, Hogan proves it's possible to work in absolute simplicity yet bring depth and texture and vibrancy to a role.

Were it not Brecht, and Sossi, and had not two particular actors — Nina Sallinen and Alan Abelew — been cast as the two stereotypical "Chinamen," the narration and secondary plots would be horribly offensive by today's standards. But we don't feel any insult — in the main because the general message is unfortunately eternally fresh but also because the performances are so cheerily self-aware and yet not self-conscious, played with an absence of apology and with total respect for the conventions.

Brechtian business abounds. Not only is the fourth wall broken, the second and third ones are too, as actors climb the lighting trusses and cross into the "right" scene. The lighting (Kathi O'Donohue) is a sly combination of realism and music-hall stylization, and the set (Janne Larsen) is pleasingly plywood. Brad C. Light and Austin Hébert make their soldiers anything but wooden, however — investing them with interest and being funny without winking at the audience. Meanwhile, Will Kepper is, um, larger than life as a sergeant with a humorously dreadful Scottish accent.