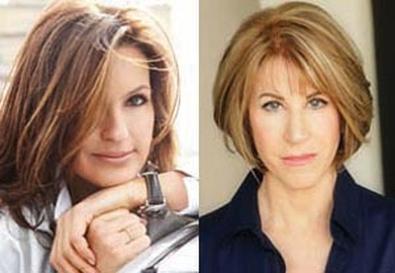 Photo Source: Antoine Verglas/NBC (Hargitay)
Before she was known as the tough but empathetic Det. Olivia Benson on "Law & Order: Special Victims Unit," Mariska Hargitay studied Meisner technique with acting coach Joanne Baron of the Joanne Baron/D.W. Brown Studio in Los Angeles. Hargitay was in one of the last groups of students that Baron (who now trains instructors) taught herself. Hargitay was also one of the last to take the class the way it was originally designed. The two women spoke with Back Stage and reminisced about the impact of the training on Hargitay's career.

Back Stage: What was different about Joanne compared to previous teachers you'd had?

Mariska Hargitay: Well, Meisner technique was different than anything I'd ever experienced. It's a really great way to be accountable to your craft and to yourself, but also it takes that kind of focus and dedication to learn anything. And this was a class that actually asked us to commit two years and not work. [The philosophy was] you shouldn't act until you go through this program, because so much is going to happen to you and you're going to change so much and grow so much.

Joanne Baron: Sanford Meisner, the instructor and creator of the Meisner technique, had a rule at his New York school, the Neighborhood Playhouse, that you could not work until you finished the training. Mariska came to the school when I had come from New York, [so] Mariska got a rigorous, pristine, premier, New York–style approach. But to be honest, modern society does not allow for that rigidity. So it no longer requires the two-year commitment, working actors are welcome, and doing it in absolute sequence is not the way everyone does it now. I don't think it's as Meisner envisioned it, but I think it was a way of negotiating the freedom people wanted and needed while they wanted A-level training.

Back Stage: Joanne, what would you say is the cornerstone of your technique?

Baron: Meisner is a genius like, to me, none other. He takes someone like Mariska who's imaginative and deep and sensitive and beautiful, he takes everything that she is—funny, sad, sexy, silly—and he accesses all of it in the first year of the training, where you develop your imagination, your sense of truth, your ability to work in an improvisational scene that is profoundly deep and real. The second year is character interpretation. That means when Mariska decides she's going to play the detective on "Law & Order," she not only brings her full contact with her imagination, her emotionality, her inner life, her humor, her sexuality, her anger, she in addition brings her clear sense of accessing character in an integral way which doesn't look like it's acted or two-dimensional. She makes her character fully breathe and alive in a way that is seamless, so she appears to be the detective in a special victims unit, and she's accessing all that is Mariska Hargitay to do it.

Back Stage: Mariska, how has Joanne helped you with your craft?

Hargitay: The first thing I would say [she taught me] is to commit to yourself and get over your personal issues so you don't drag that into your work. One of the greatest gifts that you taught me, Joanne, is how to listen. Truly listen. I think one of the mistakes actors make is we're so focused on what we're going to say. The gift that I got from Meisner was putting all my attention on the other person. In putting all my attention on the other person there is a freedom and a liberty and all of a sudden all of the attention is off you and the self-consciousness goes away, because you get to a place of true and organic reaction. What I learned in class was listening, because to keep anything real and to keep anything grounded in truth, you have to be present.

Baron: This training discovered her true committed, deeper self, [and] she was able to be in the moment in a profoundly rich way. The training did something kind of magical in accessing who she really is, but a part of her that may not have always been totally accessible before she found her full three-dimensional emotional range in a committed way.

Hargitay: Joanne's favorite line in class was "Baby, sweetie, you have an issue," and then she literally after knowing you for like 10 [or] 20 minutes would go, "Here's your issue. You have a commitment issue. This is what you need to do." Bling, bling, bling. And then, of course, it would turn out to be your issue that you worked on for two years. And it ended up being the key to your whole being. I feel you pushed me into looking at things that I was scared to look at, and then I looked at them, and then they're not that scary. And then this whole new world opened up.

Back Stage: So you go through the program, and then you have the tools you need?

Baron: Most people after the training do not continue training. They work. It isn't an ongoing program, and I don't think Meisner meant it to be; he meant you to go out and practice your craft and learn working.

Hargitay: You have such concrete tools to hold on to. And sometimes in acting, especially when you start out and you're in class, the teacher's like, "Be a pencil," and you're like, "What the hell does that mean? You be a pencil." "Okay, what does it mean to feel like a carrot?" "I have no f--ing idea." So I think what's cool is that you go through this sequence of exercises, and you get to focus on something so concrete and so easy and so fun.

Back Stage: Mariska, is there any specific breakthrough you had when you were working with Joanne?

Baron: I have a memory of something. At the time that she went, there was one room, and the only place to talk to someone was the closet. We went in the closet, and I said to her, "You're not really committed," and she was completely stunned. And she says, "What do you mean? I come here everyday. I rehearse. I work so hard. What do you mean, I'm not committed?" And I said, "There's something about the way you're approaching your actual acting where I feel like you're running on and running off as if you're apologizing or running away from really being there or feeling un-entitled."

Hargitay: I do remember the "closet talk." I remember feeling so deeply believed in and so deeply seen. I think Joanne has the ability to see very clearly what people don't see in themselves. I sort of knew what she was talking about, but not really in the details and the specificity and how it was manifesting itself. But I did know that she spoke the truth, and so it was something that I had to go away and sit with, and it was one of those turns in your life where I thought if I'm going to do it, I gotta do it. And if I didn't deal with it, I knew it was something that would haunt me forever.

Baron: For me, after that talk, you were never the same. You kind of took it to another level and held your ground. You weren't in a hurry, and you took your moments.

Melinda Loewenstein
Prior to joining the Backstage team, Melinda worked for Baseline StudioSystem tracking TV development. When she's not working, she enjoys cuddling with her cats while obsessively watching every television show to ever air.
END_OF_DOCUMENT_TOKEN_TO_BE_REPLACED