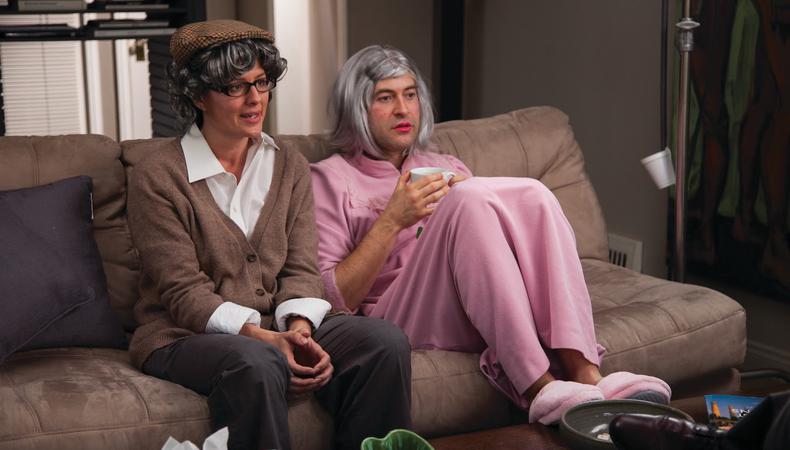 There was a time when therapy was a source of shame and secrecy for patients, but the stigma has been largely removed, and shows including “The Sopranos,” “30 Rock,” and “In Treatment” have pushed the patient-therapist relationship (for better or worse) into full view.

The creators of the Web series “Wedlock” have moved it a step further, taking the typical therapeutic atmosphere and turning it on its head. Actor Jennifer Lafleur, writer Josh Perilo, and indie innovator Mark Duplass have done away with passive patients answering questions and identifying inkblots in lieu of Fiona and Dave (Lafleur and Duplass, respectively), two best friends about which there is nothing remotely passive.

Doggedly determined to move out of the platonic “friend zone” and on to the romance, they begin attending couples therapy to, as Fiona puts it, “throw a bunch of gasoline on this thing and set it on fire.” The control-freak duo turn up the figurative heat beginning with their “Manual for Love,” a handbook they created for their first session with renowned couples therapist Dr. Jay Meeks (Rob Corddry)—complete with tabbed session topics and an index of commonly used phrases and subjects. The two push Dr. Jay—“Is it OK if I call you Doc? We had this discussion in the car: Should we call him Doc? Because obviously we’re going to be, like, best friends after a couple of sessions”—to the brink of madness by the end of the series, and Corddry is hilarious as the deadpan “Doc” astounded by the increasing level of batshit crazy in his office every week.

“Rob actually gave us the idea for what ‘Wedlock’ is now,” says Lafleur about her co-star and close friend. “The initial concept was the crazy therapist and the poor, unsuspecting couple being put through these ridiculous things, and Rob said it would be more interesting and fun if we flipped it on its head—and we all loved the idea.”

But the initial spark for “Wedlock” came after a lunch Lafleur had with her manager following an underwhelming pilot season. She expressed her boredom and frustration, and the actor’s manager hooked her up with writer Perilo. After a slew of laughing fits, the two had written the pilot episode within a week. Director (and Lafleur’s husband) Ross Partridge came on board, and with Duplass, the rest fell into place.

“I admit, the first day of shooting I was cleaning up a bit and I just sat on the couch and laughed and cried at the same time,” says Lafleur. “I was just happy that I could tell this was going to work. We spent four days [shooting all 10 episodes] literally falling on the floor laughing in stitches.”

Humorously deconstructing the usual therapy dynamic isn’t the only fresh aspect of “Wedlock.” The series is part of an increasing amount of quality online content that viewers have to pay to see. “Mark is really interested in the idea of self-funded TV content,” Lafleur explains about the multihyphenate creator. “He’s the indie godfather of film at this point, and has pioneered DIY filmmaking. So he has been thinking a lot about, Is it possible to bring that sensibility to TV content?”

Briana Rodriguez
Briana is the Editor-in-Chief at Backstage. She oversees editorial operations and covers all things film and television. She's interested in stories about the creative process as experienced by women, people of color, and other marginalized communities. You can find her on Twitter @brirodriguez and on Instagram @thebrianarodriguez
END_OF_DOCUMENT_TOKEN_TO_BE_REPLACED