Martha Plimpton is, as the kids might say, booked and busy. Calling from Pittsburgh on a recent Monday evening, the lifelong actor is buoyant and generous with her time, despite having worked all day on set. Then again, being spread too thin is just about the best problem an actor can have. “Isn’t that the nature of the beast?” she says, laughing. 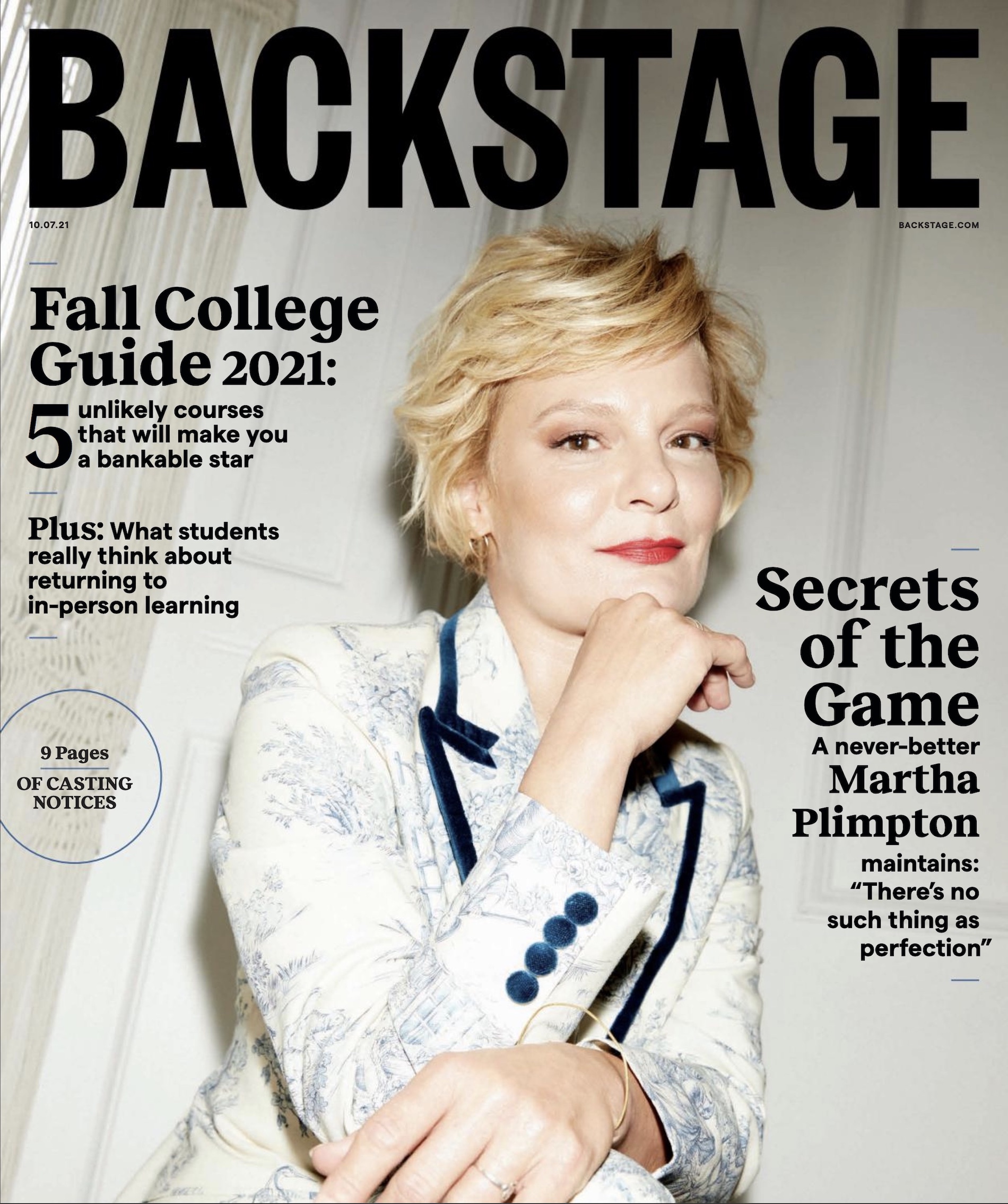 Plimpton had planned to use the weeks of late summer to do press for her new film “Mass,” a four-hander from freshman filmmaker Fran Kranz. But as luck would have it, she instead booked a television job at what was almost literally the 11th hour. Given 36 hours, to be exact, between reading the script and starting production as the new project’s lead, she’s been at work nonstop.

For an actor who requires hours of scrupulous preparation before each new role, the feat sounds impossible. Fortunately for Plimpton, she’s no such actor. “I don’t have a set schedule for what I do for a job. I don’t have a checklist of, like: First I do this, then I do that, and I do this,” she says. “I don’t really work that way. I think the main impetus behind that, though, is just the desire to have fun. From my experience in my time doing this, I’ve found the best way to have fun is just to fucking do it.”

Plimpton isn’t sure exactly when or how she developed this “just jump in” mindset, as she calls it, and she acknowledges it isn’t something that everyone can merely decide to do. She reckons it’s a working style that’s naturally evolved over her time in the industry—which, by the way, began when she was just 8 years old. She was born in New York City to actors Shelley Plimpton and Keith Carradine, who met while starring in the original Broadway production of “Hair” in 1969. So it wasn’t that performing was in her blood; performing was her blood.

“It’s the only thing I’ve ever done. I’ve never had any other job,” she says, when asked whether being an actor was inevitable. “So, I guess the answer would be yes?” 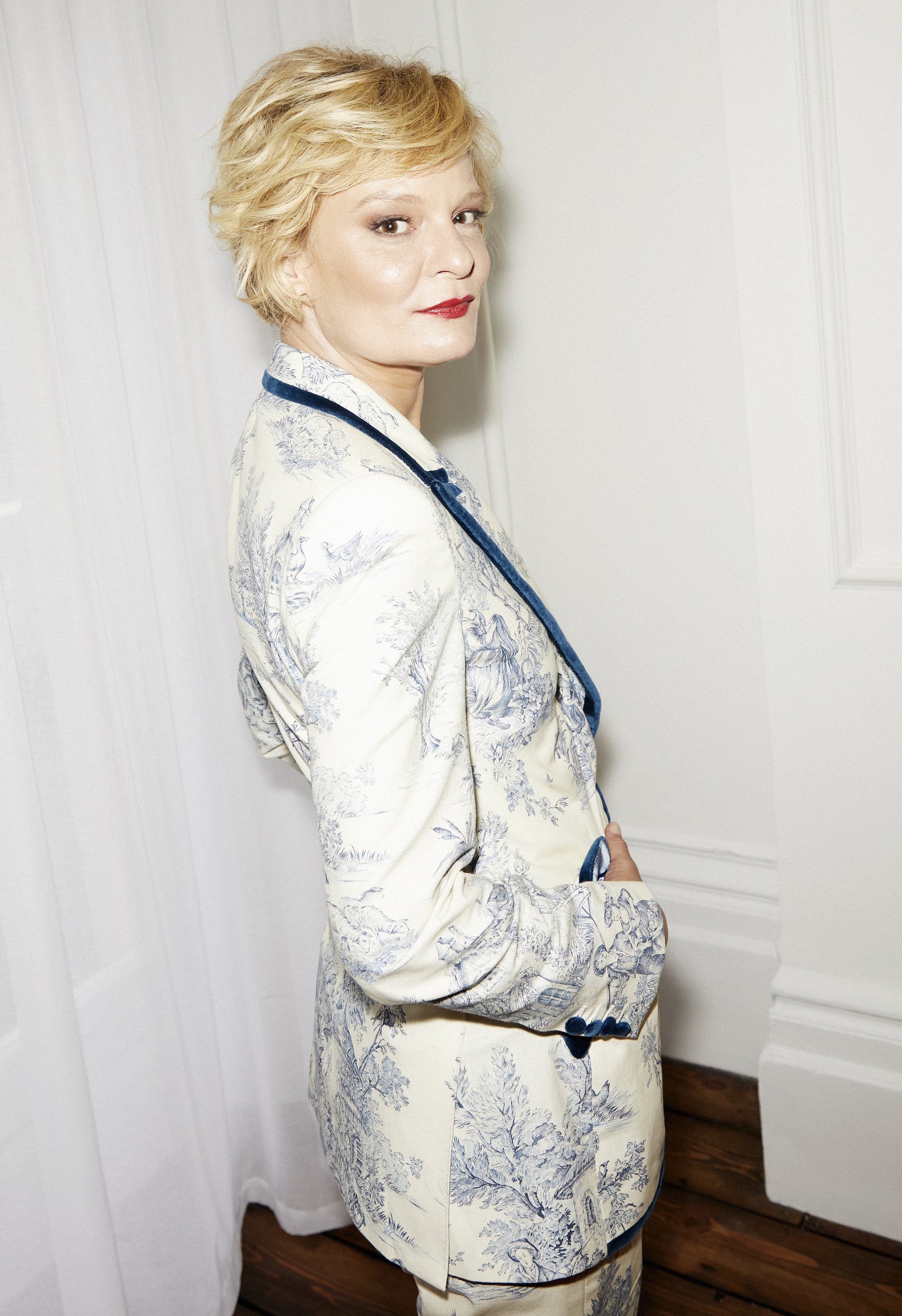 Plimpton did not attend an acting conservatory, or any acting school for that matter. Now a fixture of the small screen on series like “Generation,” “Younger,” “The Real O’Neals,” and “The Good Wife” (which earned her an Emmy), she’s learned as she’s worked. From her earliest days on professional sets in 1980s cult classics like “The Goonies” and “The Mosquito Coast,” she made herself a sponge, absorbing knowledge and expertise from those around her.

“It all soaks in; you pick it all up, and you take what you like and leave the rest,” she says. “I absolutely learned on the job. I learned from working with lots of different kinds of people and lots of different styles of filmmaker and styles of actor. And I’m still learning.”

“There’s all kinds of jobs we could be doing that are no fun at all, right? And we’re lucky enough to be doing this crazy thing.”

She worked consistently in film and regional theater throughout her teens and early adulthood, until arriving at a period in her late 20s and early 30s when things dried up. This was the ’90s, and as a female character actor, there just weren’t many roles for which she was well-suited. “There’s not a lot of work for women in their 20s and 30s unless they’re the lead, right? There’s almost no character work. And the character work that is there tends to be really boring,” she laments. (She does acknowledge that this has improved somewhat over the last decade or so.)

It was during this rough stretch that she had a conversation with her mother, one that completely changed her perspective on the industry and her place in it. “My mother was saying, ‘Look, do you want to be a working actor or do you want to be a movie star? Because movie stardom, you can’t get that. It picks you,’ ” Plimpton remembers. “She said, ‘You can either be frustrated because you’re not getting picked to be a movie star, or you can be an actor. You can be a working actor and go from there.’ 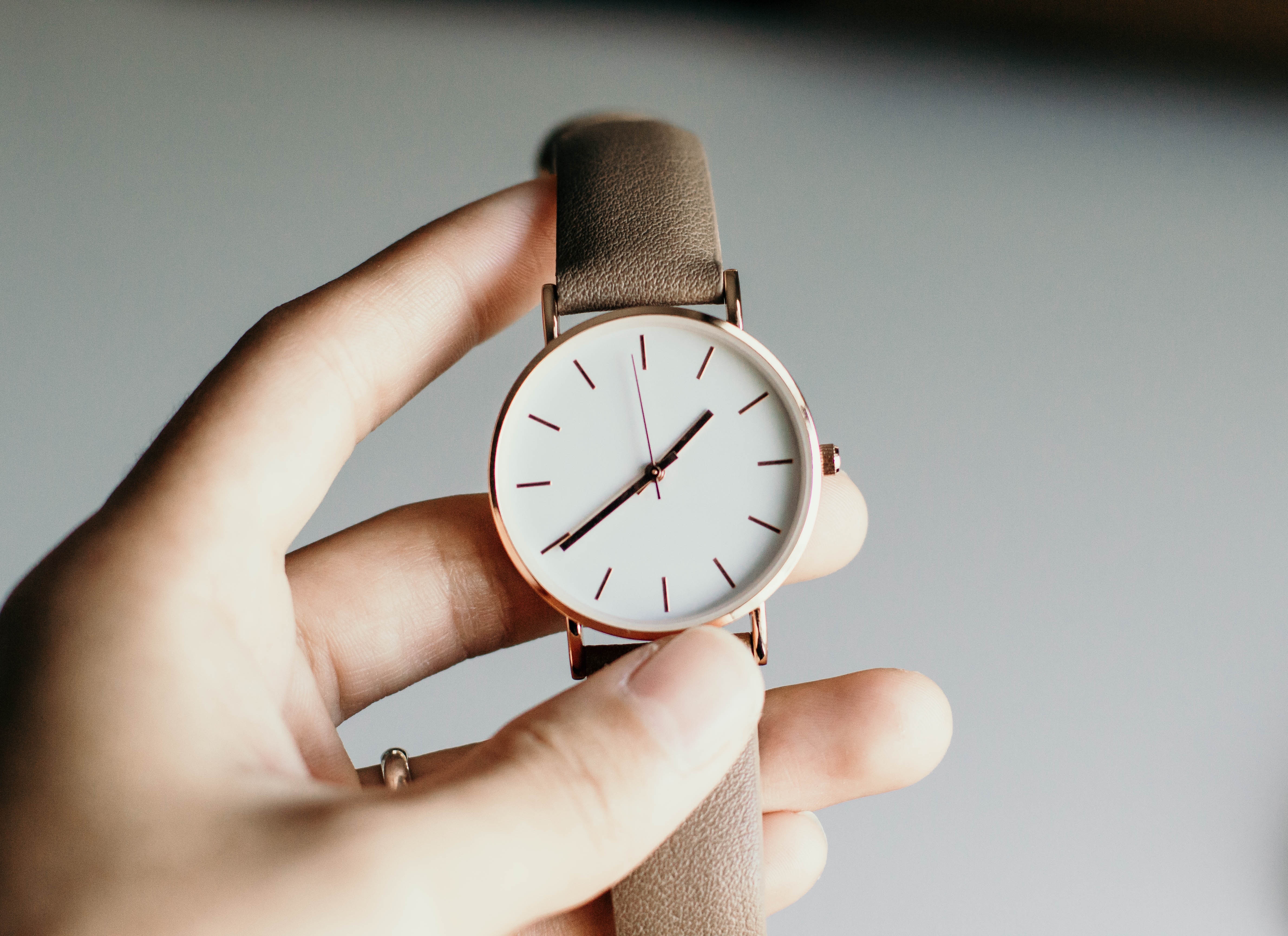 7 Tips for Nailing That Last-Minute Audition

“Always listen to your mother,” she concludes, taking a beat. “I mean, if she’s worth listening to.” So Plimpton made the choice to stop chasing stardom and start pursuing a life as a working actor. Which isn’t to say she suddenly became immune to the slog of that venture and all that goes with it, but it led her to a place where she could “chill out a little bit—not be so hard on myself.” She recalls that she even gave her audition process a much-needed burst of levity: “I was just like, You know what? Give yourself a break.

“It’s the ebb and flow of this business. It’s a toughie sometimes, and it can do a number on your ego,” she continues. “But if you can, just try and not take it personally, and remember that you love what you do and it brings you joy and you have fun doing it. There’s all kinds of jobs we could be doing that are no fun at all, right? And we’re lucky enough to be doing this crazy thing where we wear wigs and we dress in other people’s clothes and we talk funny—and we get paid for it.”

Which brings us to her approach, her process—how she does what she does. She insists that, on set, no matter what kind of scenes are on the schedule for the day, she always prefers to be surrounded by laughter, noise, and a slight air of human chaos than hushed assistant directors and isolated prep in a corner. Not only does this allow her to more readily access what she’s feeling on the day and use it in her performance; it also eliminates the risk of overpreparing. 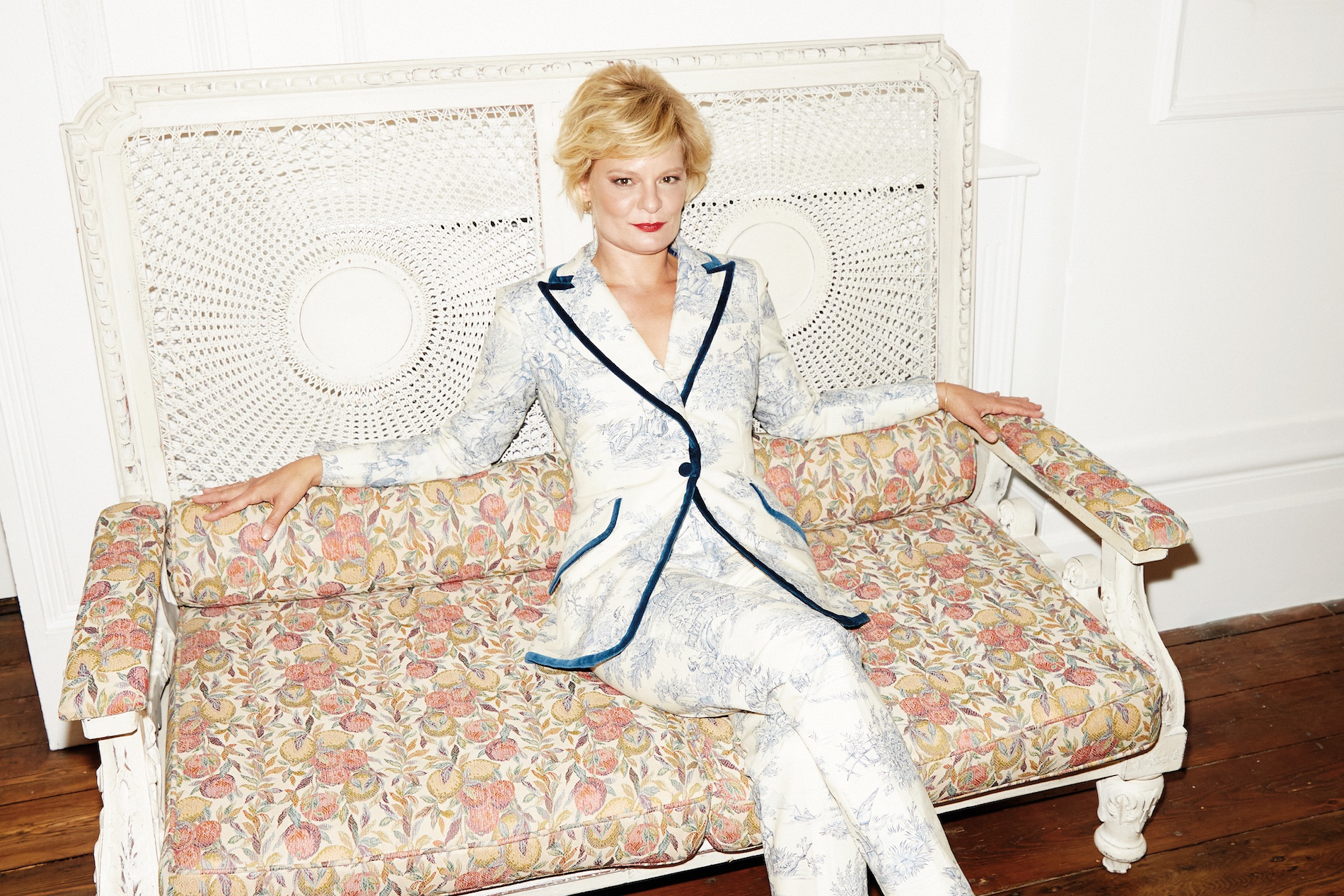 “There’s a lot of work involved, but you know, who thinks about [it like] that? If you talk too much about it, it loses its zing. It loses its spicy pepper,” Plimpton says. By that same token, if you get bogged down worrying that you’re blowing a scene, the worst thing you can do is dwell on it. “Either ask for another take, or trust that they got what they needed and that you’re not the expert,” she says. Either way, it’s not the end of the world, and the day will end exactly the same as the one before it: “And then, in a few hours, no matter what, you’ll be home,” Plimpton says.

She doubles down on citing the importance of laughter on set, even for projects that are immensely weighty and unfunny, as “Mass” is. The film is a chamber drama centered on four parents coping with the aftermath of a tragedy; it’s best to head into the movie unaware of its additional conceits, allowing each layer to peel away as the plot unfolds. Ann Dowd, Reed Birney, and Jason Isaacs star alongside Plimpton, and the film is set for the most part in a single dour room in a church. Given its heavy material, it is tough to believe that outside of “action” and “cut,” the atmosphere on the set was jovial.

“We did a lot of laughing on the set, an enormous amount of laughing. I like to go right into it and just put everything out on the table,” Plimpton says. “It makes it much easier to do it that way than to feel like I’ve got to work up to something.” She also insists that, even though she’s playing a character who’s carrying immense grief and pain, she didn’t have to premeditate about how to get there. She only needed to show up willing to play.

“You can either be frustrated because you’re not getting picked to be a movie star, or you can be an actor. You can be a working actor and go from there.”

“It’s really all there in the script. And there really wasn’t much other delving or other work, for me anyway, except to just be in it and just go in there and do what the scripts asked me to do.” Her scene partners, of course, were also hugely helpful, and the group got exceptionally close in a short amount of time.

“We would get together in our hotel rooms and have cheeses and wines and go through the script and talk it through. We shared so much,” she says. “We developed a trust that would make it possible for us to be in there. And we all realized that we would make lifelong friends, having gone through this particular movie, this kind of story, together. Ann says it all the time: ‘You’ll never be rid of me.’ I mean, they’re part of my life now forever.” 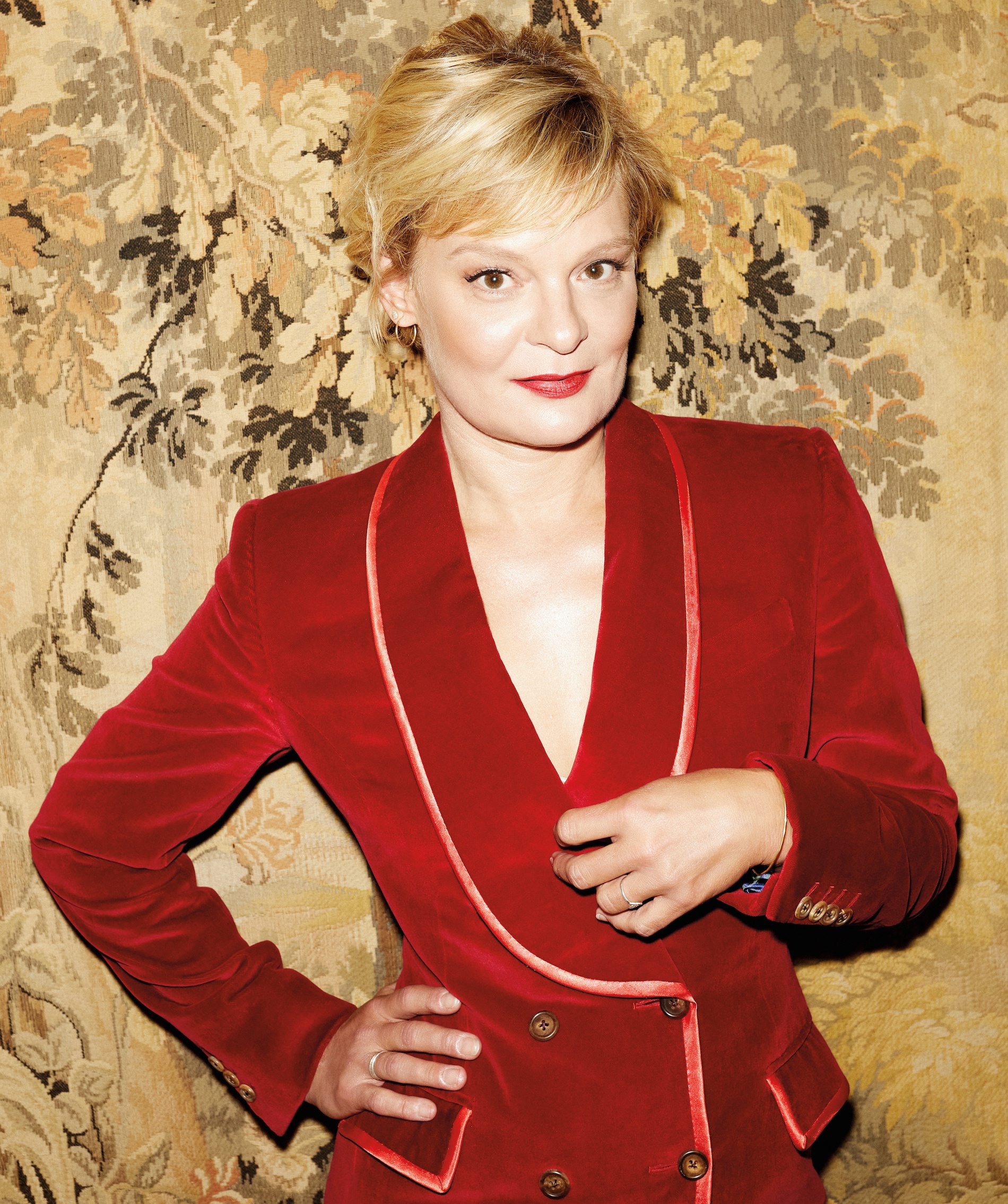 The film itself, with its single setting and emphasis on long sequences of dialogue, evokes a play, which also helped the quartet of actors—all of whom are stage veterans—wade through the muck. Plimpton learned a lot from taking part in such a specific working experience. But regardless of the medium, genre, whom she’s working with, or any other variables, she insists that each one teaches her something new.

Though she might not immediately know what that something is, she knows it will eventually make its way into her perfectly imperfect approach to acting. She wouldn’t have it any other way.

“Look, there’s a reason that certain Indigenous tribes will weave a mistake into every rug,” she says. “There’s no such thing as perfection. And seeking it will just give you an ulcer.”

Photographed by Zoe McConnell on 8/28 in London

Casey Mink
Casey Mink is the senior staff writer at Backstage. When she's not writing about television, film, or theater, she is definitely somewhere watching it.
END_OF_DOCUMENT_TOKEN_TO_BE_REPLACED