Matt Lauria Gets Tough on ‘Kingdom’ 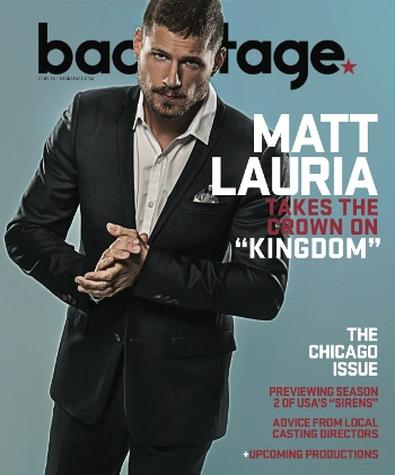 A former MMA champion whose life and career were sidelined by a four-year prison sentence, Ryan is freshly out of jail when the series begins, returning to his Venice Beach hometown where his ex-fiancée is now married to Ryan’s close friend Alvey (Frank Grillo), a one-time MMA fighter-turned-gym-owner. Boasting an intimidating build and a “Destroyer” tattoo splayed across his broad chest like a warning, Ryan is a warrior laid low, searching for redemption while trying to stay on the straight and narrow with his parole officer.

A friendly, thoughtful conversationalist who’s quick with a joke, Lauria has been married for eight years and talks about judging a script’s quality by whether it makes him cry—he definitely doesn’t come across as a troubled, taciturn fighter. Turns out the “Kingdom” producers felt the same way, initially wanting him for the role of Nate, a sweet, impressionable aspiring MMA fighter.

“I have this wholesome disposition in a lot of my characters,” he explains. “A certain earnestness.” Is that accurate to his personality? Lauria smiles. “Yeah, total bullshit,” he replies facetiously.

Asked what drew him to Ryan, he responds, “I just thought it was an interesting story of a guy who’s a shell of himself. There was such baggage and damage, a guy who comes out of jail contrite and strangely agreeable. I think there’s a lot of self-preservation about Ryan. The fear of the things that made a mess of his life and made a mess of the lives of those he loved—there’s a fear of fucking up again. And yet he’s a guy who’s referred to constantly as savage and a monster—that juxtaposition alone is fascinating and attractive.”

In less than seven years, Lauria has become a ubiquitous go-to character actor on network television programs, part of everything from “Lipstick Jungle” to “Friday Night Lights” to “Parenthood.” (Memorably, he also played a hunk who tempts Will Arnett’s scheming Devon Banks in an episode of “30 Rock.”) But when he talks about his roles, it’s as if they’re not in the past—like he’s still living with them. Often, he’ll pause to reconsider something he just said, try phrasing it another way, and occasionally he’ll go quiet, searching for a worthy answer to a question. Lauria mentions that an acting teacher once advised him on the importance of being thin-skinned when playing a character in order to be emotionally open. Talking about his craft seems to inspire a somewhat similar response: He returns to the world of each role rather easily. 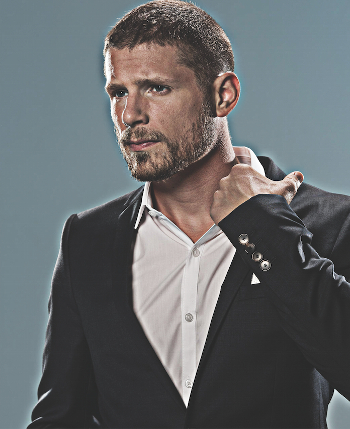 To illustrate this, Lauria mentions, “On ‘Friday Night Lights,’ [his character Luke Cafferty] was in love with this girl. I tried so hard to get her, and when the show wrapped there was a part of me missing. I was like, ‘I don’t know what to fight for anymore. Luke doesn’t need to chase after Becky anymore, and so much of Matt’s investment in life was serving Luke and trying to make him happy—and now I have nothing to do.’ ”

From the sound of things, his was a happy childhood. Growing up in Alexandria, Va., Lauria and his family moved outside of Dublin when he was 7, returning to the States—Orlando, Fla., specifically—in his early teens. He fights against getting emotional when talking about his father, an animator who became a teacher to those wanting to get into the field. “He’s so gifted and such an inspiration,” Lauria says. “My dad has this beautiful spirit of being able to create no matter where he is. He’s always been so selfless with our family. It’s hard to put words to it. He’s an incredible man.”

Lauria has an easier time pinpointing the day he took an interest in acting as a boy in Ireland. “We were required to audition for plays—we had to, we had no choice,” he says. “It was the musical of ‘Alice in Wonderland,’ so I had to sing. I had this thick Dublin accent—I sang, and it was bad. But I got the understudy for the March Hare. Then [the lead] got really, really sick, and I had to play the part—and it was just this incredible amount of fun.”

Moving to Florida did nothing to quell his enthusiasm. He was accepted into Dr. Phillips Center for the Performing Arts’ competitive visual and performing arts program, where he fell in love with Marlon Brando. “In our English class we had research assignments, and mine was on Marlon Brando and Orson Welles.” The then-14-year-old thought to himself, Who the hell are these guys?

“Then I watched ‘A Streetcar Named Desire,’ which is still one of my favorite films,” says Lauria. “I prefer it to ‘On the Waterfront’—it’s always been more of my jam. Back then, my concept of black-and-white films was, ‘Oh, they’re overacting and so big.’ But when Marlon Brando first walked on the screen, it just totally shattered [that conception]. He’s all sweaty, he’s scratching himself, he’s snorting, he’s not making eye contact; I was absolutely mesmerized. Transfixed.”

Lauria’s reassessment of black-and-white movies is indicative of his personality: Repeatedly, he either corrects himself or mentions a time when his limited viewpoint was upended by new experiences. He talks about the one thing that most infuriates him, bullying, but then goes quiet, finally saying, “I did bully somebody.” It was back in his Dublin youth, but the realization—the fresh recall of the event—still embarrasses him. “I was insecure,” he says. “Money was very, very tight [in my family], and I remember picking on a kid who was poorer, because everybody else made fun of him. Totally horrible.”

This thread of owning up continues when he confesses to early misgivings about creator Byron Balasco’s pilot script for “Kingdom.” “I thought it was so vicious and brutal,” he says of the show’s MMA milieu. “Initially, that was my concern: Is this going to be endorsing something that I don’t know quite how I feel about? We have all these judgments in life until we have to encounter them. When you get immersed into [a creative project], you’re introduced to a world that’s foreign to you. Your world changes, your heart expands—your values adjust the more that you learn.”

Having wrapped the first season of “Kingdom,” Lauria still thinks about Ryan. He has clear empathy for the guy, and a newfound appreciation for MMA fighters, responding to the camaraderie and kindness they show one another. But as he himself admitted, it’s strange to picture this genial, mild-mannered actor as the same person whose character’s commanding physical presence plays such an integral part on the show.

Lauria sits and contemplates, trying to explain his transformation into Ryan. He speaks in the present tense. “You’re constantly aware of your surroundings,” he says. “Knowing that you’re ‘Destroyer’ and knowing that people are gonna want to fight you. Even the simplicity of [putting your] chin down when you fight…”

Lauria tilts his head down, assuming Ryan’s chin-down, eyes-lowered demeanor. Then he stands up, starts to move a little bit around the room, more Ryan than Matt now. 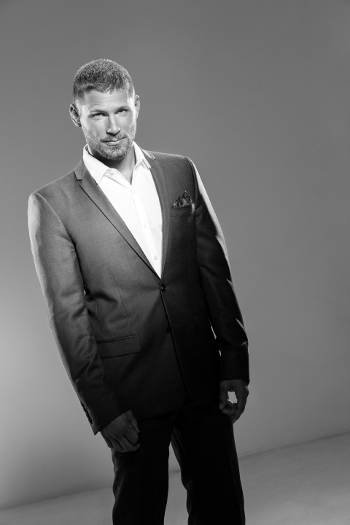 “I notice that a lot of these guys have these sloped, really thick necks,” he says, still in motion. His head is practically immobile, hulking. “The joke is you call their name and they do this”—he shifts his whole body, rather than turning his head, to pantomime responding to an imaginary person in the distance. “The rigidity of the neck…and their arms are just heavy.”

Suddenly the quiet, forceful power of Ryan is present in the room.

And then, just like that, Lauria sits back down, cross-legged again, shaking off the character.

“A lot of Ryan is being very still,” he says.

When young Matt Lauria moved with his family from Dublin to Orlando, Fla., he applied to Dr. Phillips Center for the Performing Arts, which specialized in theater. To this day, he still can’t quite fathom how he was accepted. “It was truly miraculous that I got in,” he says. “I’m grateful every day that I got accepted.”

But once he got in, he realized how hard the school was going to be. “Picture a freshman in high school,” he says, “and I was late to puberty and everything else. But they literally gave us the talk: ‘Look to your left and look to your right—one of those people won’t be here when you graduate.’ We started with 50 [students], and I think we had a graduating class of 18.”

Beyond working on monologues and other typical acting exercises, Lauria and his classmates learned an appreciation for performance through a unique exercise. “One of our teachers made us read critiques of [current] plays in periodicals like Variety,” he says, “and then we had to write a critique of the critique. It was to get us writing and to think critically about the craft,” as well as expose the aspiring actors to what was going on in the New York theater scene.

To hear Lauria talk about it, Dr. Phillips Center was almost like a boot camp, one that he came to love. “We were fully immersed in this program,” he recalls. “It made me really love [acting], really cherish it. It got to the point where me and all my buddies were like, ‘We’re moving to New York! We’re going to get a shitty apartment that has roaches! We’re all gonna split it and sleep on the floor because it’s so cheap! We’re gonna start a theater company!’ That was the dream—that was always the dream from the very beginning.”

Lauria laughs at the fond memory. “They’re all in New York still. I moved there initially, but stuff brought me out here.”