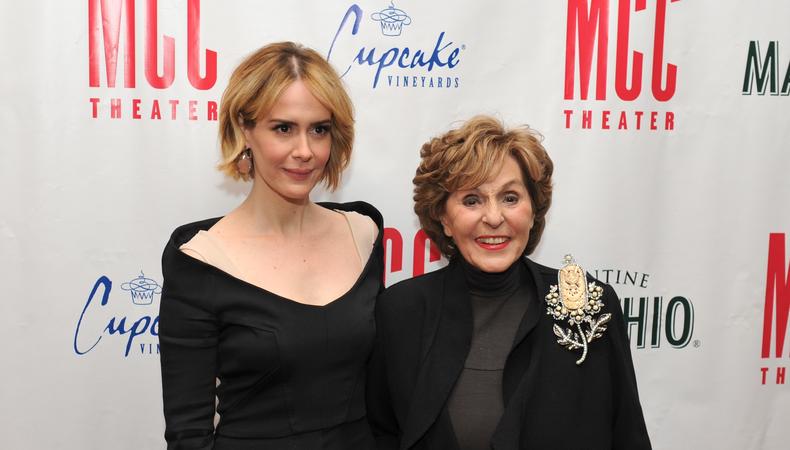 “It’s exciting to be honored by a company you have such a high respect for,” said Weissler on the red carpet at the Hammerstein Ballroom. “But I’m most excited to finish my speech so it’ll be over.” A trailblazer for female producers, Weissler has taken home a whopping seven Tony awards for some of the best musicals of the last few decades including “Pippin,” “Chicago,” and most recently “Finding Neverland.”

Paulson, who launched her acting career largely in MCC shows, was celebrated for her work in everything from “American Horror Story” to “12 Years a Slave.” The actor echoed Weissler’s nervousness, joking the two might switch their speeches. “Half the things that have happened in my life and my professional life have been things I never could’ve possibly dreamt of,” Paulson told Backstage. Up-and-coming actors, she added, should focus on the work rather than the pursuit of recognition: “It’s about the experience itself, not how it’s received or what the result is.”

Host Aasif Mandvi introduced MCC’s executive director Blake West and artistic directors Bernard Telsey, Robert LuPone, and William Cantler, who opened the proceedings by praising the honorees for their “bold and fearless” work. The theater’s Youth Company Alumna Award was presented to writer-actor Dominique Fishback, who spoke passionately about learning to find the spotlight and ground herself onstage. “Now I know how to find my light,” she said.

The evening’s entertainment featured a slew of musical theater regulars performing roles in which they wouldn’t normally be cast. “I’m most excited about the chances the actors get to really be silly and do stuff they would never, ever get to do,” said Telsey to Backstage. Some numbers, such as Andrew Rannells’ “Meadowlark” and Leslie Odom Jr.’s “Another Hundred People,” were clearly songs the artists had yearned to cover for a long time. Annaleigh Ashford even confessed her affinity for the Tin Man in “The Wiz” since high school, and proceeded to launch into a spirited “Slide Some Oil to Me,” complete with shiny silver unitard.

Others reveled in the novelty of cross-gender casting, particularly Ben Platt and Uzo Aduba as Mrs. Lovett and Sweeney Todd, respectively, for “A Little Priest,” as well as the all-male “Cell Block Tango” complete with “Chicago”-esque choreography, a hilarious homage to Weissler.

Laura Benanti sang duets with Christopher Fitzgerald on “Sixteen Going on Seventeen” and Jessie Mueller on “Agony” from “Into the Woods.” Joshua Henry brought the “Beautiful” star up to introduce his spectacular rendition of “(You Make Me Feel Like) A Natural Woman.” The finale numbers—Betsy Wolfe’s “Let It Sing” from the musical “Violet,” and Jeremy Jordan’s rendition of “Funny Girl’s” “Don't Rain on My Parade”—brought the house down.

For more information on MCC’s many efforts and their 2015–2016 season, visit mcctheater.org.

Jack Smart
Jack Smart is the awards editor at Backstage, where he covers all things Emmy, SAG, Oscar, and Tony Awards. He also produces and hosts Backstage’s awards podcast “In the Envelope” and has interviewed some of the biggest stars of stage and screen.
END_OF_DOCUMENT_TOKEN_TO_BE_REPLACED