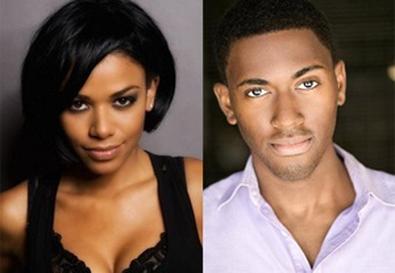 Sherial McKinney and Robert Hunter will be enjoying more than just the sun and sand when they travel to Miami next month for the 16th annual American Black Film Festival. The two young actors have been chosen as this year's winners of the "Star Project," an international acting competition designed to spotlight emerging multi-cultural talent. Sponsored by NBCUniversal, the "Star Project" was created in 2009 to provide a platform for undiscovered actors and support their career advancement.

"NBCUniversal is honored to partner with the ABBF to encourage and reward promising young film artists with a chance to elevate their work in order to receive instruction, guidance, and our full support in their endeavors," Kendra Carter, director of Talent Diversity Initiatives for NBCUniversal, said in a statement. "We look forward to providing these actors with the right platform that could launch their careers and allow an even greater audience to enjoy their talents."

McKinney and Hunter received all-expense paid trips to Miami, Fla., to attend this year’s ABFF, which runs June 20-23. They will both be introduced to the audience at the Winners Circle awards presentation on the closing day of the festival. One grand-prize winner will be selected by NBCUniversal to appear in a walk-on role on "Days of Our Lives," and will have the opportunity to audition for a leading casting director.

McKinney has studied with acting coach Tom Todoroff and recently appeared in the first episode of "Will to Live," a new TV One series inspired by true events. She told Back Stage that she was compelled to enter the contest after attending ABFF once before, to screen her 2009 film "He's On My Mind."

"It's such a great film festival to promote black filmmakers and actors," McKinney said. "I hope to be able to meet with many different directors and casting directors, just see more opportunity in this industry, which is difficult as a black actress sometimes. A lot of times, you get roles that are stereotypical, and I don't feel like I fit in that box. I would like to broaden my range as an actress, through this film festival and through winning this award."

Hunter, a Cleveland native who attended the American Academy of Dramatic Arts in Los Angeles on his way to pursuing an acting career, began in theater but made his film debut last year in "L.A. Bros." He says his main goals in Miami will be to network and gain a greater knowledge of the industry.

"The American Black Film Festival is a way to highlight the black filmmaking community, and allow actors to have those diverse roles," Hunter said. "And if the major film companies see what we're doing by ourselves, and it's great work, they will pitch in. That's what I believe. Don't chase your dream. Live it."

McKinney and Hunter were chosen by a jury comprised of actors, directors, and casting executives. Contestants were required to submit two monologue videos online, one selected by NBCUniversal and ABFF and the other of their choice. (Hunter performed a Shakespearean monologue. McKinney says she purposefully chose a comedic monologue to contrast with the dramatic piece chosen by NBC, in order to show her broader range in comparison with the other female finalists.)

"I think Al Pacino said, 'I never audition. I only act,' and I think that's the best way to go into an audition," Hunter said of preparing for his auditions and recording his video monologue. "Don't look at it as, 'I have to audition. I have to get this part.' Just act. Do what you do best. Have fun. Make choices. That's what the audition process is all about. And if you keep that in mind, you'll leave feeling confident about your work." He added, "Just focus on your craft and get better every day. And if that happens, the right people will see it, and you will get the right role."

Past "Star Project" winners include Stephen Hill ("12 Steps to Recovery," "It's Always Sunny in Philadelphia") and Emayatzy E. Corinealdi ("The Young and the Restless"), who will appear in two projects on BET this year -- in the dramatic film "Middle of Nowhere," and the new dramatic series "Gun Hill" with Larenz Tate.