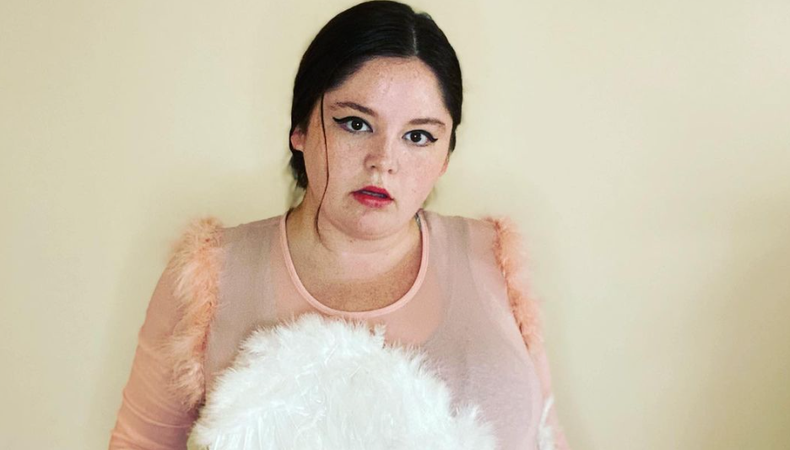 “That’s a Meg Stalter character” is now firmly in the internet vernacular.

Having spent years amassing a fanbase on the alternative comedy circuit, Stalter’s 2020 performing plans were put on hold like everyone else’s when the pandemic struck. However, with the world cooped up inside and glued to their phones even more than usual, she spotted an opportunity for an especially captive audience in her still-growing 56,000 Instagram followers.

Stalter’s “brand” is in some ways hard to define, as most of her videos are parodies of vague but very specific internet and cultural tropes. But much like that which she is making (lovable) fun of, you know it when you see it—and therein lies the key to Stalter’s success: her deft mix of niche character creation and full commitment to whichever role she’s written for herself.

Take, for example, “When an actress promotes her new movie”; the two-minute clip is every behind the scenes video you’ve seen from a photoshoot with an A-list actor, in full glam, giving her project an overly profound promotional send-up.

From this past summer, there’s “The 21-year-old the interior designer” (yes that extra “the” is intentional). It really does not sound like an identifiable trope but her artfully positioning a curling iron on top of a pair of mannequin legs just works. Also, “That’s kind of my catchphrase: Everything’s gettin’ thrown away; what can stay?” It is born of the Bravo network and further, it is Bravo-ready.

Of course, we can’t not include “The girl you get stuck with in every waiting room at an audition:” For you actors, this one will make you laugh and then ultimately cry a little before laughing again. You know this girl (you may have even been this girl).

The girl you get stuck with in every waiting room at an audition: pic.twitter.com/vA4dyuAhlg

There’s also “The girl you told your friends about and now you’re regretting it,” which is filled with all the cutesy, rom-com montage footage you’ve been unknowingly saturated with every time you’ve seen a movie:

And then there’s a personal favorite—that is highly NSFW—”Big Bitch Realty! Let ME help YOU buy a house!!” I don’t want to ruin the joke (and I also don’t want to print its opening line here) but it perfectly captures the “sassy realtor trope” that has been featured on one in every three network series of the aughts.

You could spend all day sorting through Stalter’s videos—all of which are around the two-minute sweet spot in length. But it’s really worth exploring her oeuvre yourself, as it’s the best and most effective way to gleam from her tactics. And the lesson here is self-evident, in that describing what kind of work Stalter does is futile. Instead, she just went ahead and did it. Now, it speaks for itself—or, more accurately, every Meg Stalter Character does.

Casey Mink
Casey Mink is the senior staff writer at Backstage. When she's not writing about television, film, or theater, she is definitely somewhere watching it.
END_OF_DOCUMENT_TOKEN_TO_BE_REPLACED