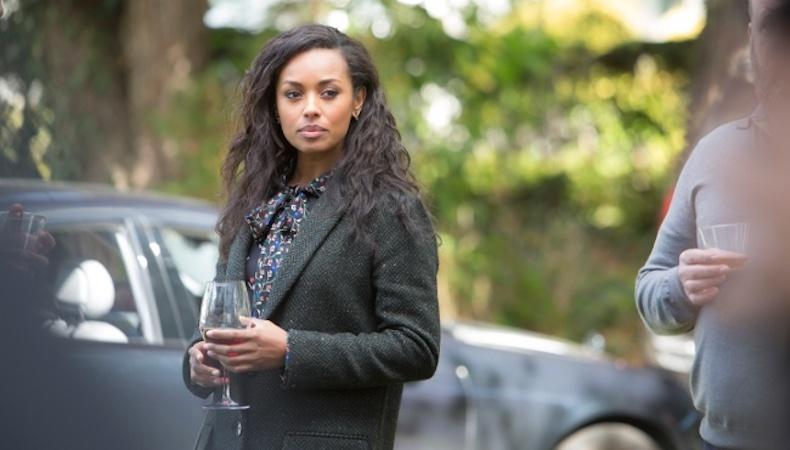 Melanie Liburd stars alongside Naomi Watts (who plays therapist Jean Holloway) and Billy Crudup (who plays her lawyer husband, Michael) in Netflix’s new psychological thriller “Gypsy.” The U.K.-to-Hollywood transplant came by Backstage HQ and discussed her latest role, offered advice for self-taping, and revealed her favorite part about working on Season 6 of HBO’s “Game of Thrones.”

Her “Gypsy” character, Alexis, has secrets of her own.
“Alexis is a sassy aspiring writer who is looking for love in New York and works for Michael Holloway as a paralegal while she’s pursuing acting on the side.... They develop a very close friendship over the season, and she kind of gets sucked into the lives of Michael [and Jean], as any assistant does because they listen in on every call. She has a lot of secrets, Alexis.... Every character on the show has such depth.”

Actors should pursue what scares them the most.
“I think after doing commercials, I just wanted more, and then once I started training, I was like, ‘Oh my goodness, this is the most terrifying thing I’ve ever done in my life. I’m completely out of my comfort zone and I feel ridiculous.’ And there would be times when you fail so much and do some terrible acting, but you learn from it. I was just hooked. It’s crazy how addictive [acting] is.”

When self-taping, a time limit helps.
“Tapes are really funny...because you can just go in and give yourself 20 minutes—‘OK, we’re gonna get this self-tape done and we’re gonna be done [in that time].’ But it never works out that way. You could be there for, like, three hours. You’ve just got to send it. Just go!”

Actors have to know what they’re saying—even in fictional languages.
“I played a red priestess [on ‘Game of Thrones’], and I worked for a whole month with the dialect coaches because I auditioned just in my own accent, and they were like, ‘Oh no, you’re going do it in High Valyrian.’ And it literally is a real, made-up language, so it was Latin-based, and it was all phonetically broken down. I love stuff like that. Like any language, if you’re acting it, you have to know exactly what you’re saying.”

Use the 100-question rule.
“It’s interesting because I find every character is really different. Some things you read on the page, and some things just naturally come to you, which you shouldn’t mess with so much. Technically, you can break down the scene and find the arcs and find the color to give it some structure. But I love [building a character using] the 100-question rule. I love music; I love finding music for a character or a scene or a feeling. I’m quite organic.”

Want to hear more from Liburd? Watch the full video interview on our Facebook page.

Benjamin Lindsay
Benjamin Lindsay is a senior editor at Backstage, where if you’re reading it in our weekly magazine, he’s written or edited it first. He’s also producer and host of our inaugural on-camera interview series, Backstage Live, taking informative deep-dives with actors across mediums to discuss their craft, their work, and their advice for others getting started in the field.
END_OF_DOCUMENT_TOKEN_TO_BE_REPLACED